The prime minister's "kar seva", or service with hands, will be successful only when these workers are able to stand on their own feet, Shiv Sena's Saamana opined. 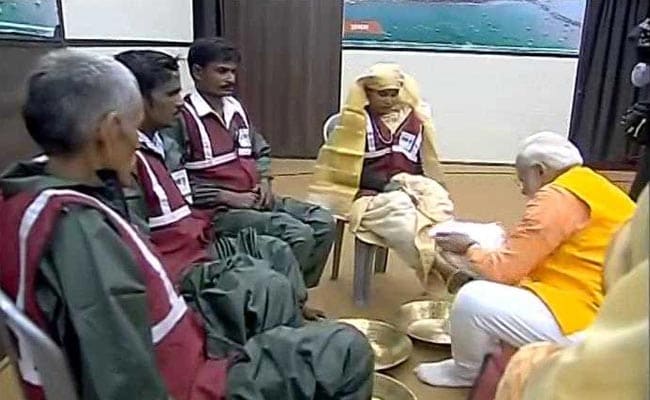 PM Modi had washed the feet of sanitation workers as a sign of respect for their contribution to society.

The Shiv Sena on Tuesday praised Prime Minister Narendra Modi's gesture of washing the feet of sanitation workers at the Kumbh Mela, but said the question before these people is of their "stomach" and not feet.

The remarks came two days after PM Modi took a dip at the Sangam at Uttar Pradesh's Prayagraj and conducted 'charan vandana' (washing the feet) of select sanitation workers as a mark of respect for their efforts in keeping the Kumbh Mela clean.

"Modi should be congratulated for washing the feet of sanitation workers, but the question concerning them is not about their feet but their stomach," the Shiv Sena said in an editorial in its party mouthpiece Saamana.

The prime minister's "kar seva", or service with hands, will be successful only when these workers are able to stand on their own feet, the Marathi publication opined.

On Sunday, PM Modi also launched the ambitious Rs 75,000-crore Pradhan Mantri Kisan Samman Nidhi (PM-KISAN) scheme at Gorakhpur in Uttar Pradesh, by transferring the first instalment of Rs 2,000 each to over one crore farmers.

Referring to it, the Shiv Sena said the poll season has begun and the government has taken a slew of decisions, including PM-KISAN scheme and cutting GST from 12 to 5 per cent on under-construction houses.

"There are allegations that all this is being done keeping elections in mind. However, the budget before poll announcements are made for political benefits. Every political party in power does that," said the Uddhav Thackeray-led party, an ally of the BJP at the Centre and in Maharashtra.

It also pointed out that PM Modi wore a saffron turban in this year's Republic Day in a bid to send a message to Hindu voters.

"However, the BJP lost polls in three states that were traditionally 'Hindutvawadi'," it said.

It was apparently referring to the BJP's defeat in the three Hindi heartland states of Rajasthan, Madhya Pradesh and Chhattisgarh during the Assembly polls held there in November last year.