The Shiv Sena and BJP broke off their decades-old alliance after the 2019 Assembly elections in Maharashtra. 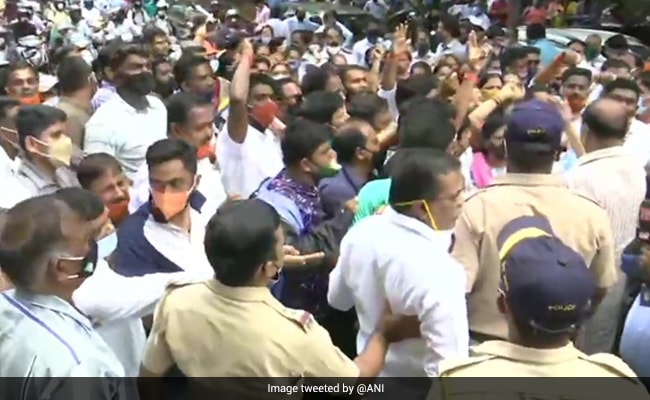 The police used force to disperse the supporters of the two parties.

Clashes broke out between Shiv Sena and BJP workers in Dadar area here on Wednesday after the youth wing of the BJP took out a protest march against "offensive" remarks in the Sena mouthpiece Saamana about the land deal controversy in Ayodhya.

The police used force to disperse the supporters of the two parties which were once allies. Sena workers assaulted a woman member of the BJP, the latter alleged.

The trouble started after the Bhartiya Janata Yuva Morcha took out a protest march towards Shiv Sena Bhavan in Dadar, the Sena's headquarters, over a Saamana editorial which demanded probe of a "suspicious" land purchase deal by the Ram temple trust in Ayodhya. The trust has denied the allegations.

Following the clashes, police took several persons in custody but nobody had been arrested till late in the evening, an officer said.

Shelar, an MLA and former Maharashtra minister, warned of strong retaliation in future.

"I warn Shiv Sena workers of retaliation if they again attacked our workers," he said, alleging that Sena workers also attacked a woman supporter of the BJP in the presence of police.

"The Sena was once proud of the demolition of the Babri mosque, but now for political reasons it is defaming Lord Ram. Sonia or Vadra (Congress leaders Sonia Gandhi and Priyanka Gandhi-Vadra) have now become the Sena's deities," he said, in a swipe at the Sena's alliance with the Congress in Maharashtra.

Sena MLA Sada Sarvankar said, "We were first told that BJP workers were coming to protest, later we learnt that they are coming to vandalise the Sena Bhavan. So we stopped them before they could reach near it."

Akshada Tendulkar, a BJP supporter, alleged that when she was returning to her vehicle after the protest, she was suddenly attacked by Sena workers and "police did nothing to stop them".

The Shiv Sena and BJP broke off their decades-old alliance after the 2019 Assembly elections in Maharashtra.