Sena corporators became angry after the mayor apparently refused to discuss their demand for an art gallery for Bal Thackeray. 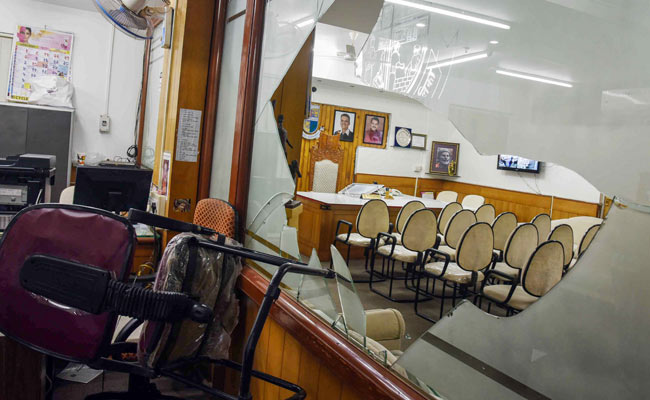 Shiv Sena corporators on Tuesday vandalised the office of Mayor of the Mira Bhayandar Municipal in Maharashtra's Thane following a clash with their counterparts from the BJP.

The incident comes a time when the BJP and Shiv Sena are engaged in seat-sharing talks for the upcoming assembly elections in Maharashtra.

Sena corporators became angry after Mayor Dimple Mehta, who belonged to the BJP, apparently refused to discuss their demand in the standing committee meeting for an art gallery for Sena founder Bal Thackeray.

Sena corporators had been insisting on taking up the issue, anticipating imposition of the model code of conduct for the ensuing elections, sources said.

The video shows the corporators damaging the furniture in the office of the Mayor and in the standing committee hall. In the pandemonium, corporators of the Sena and the BJP came to blows and abused each other.

The MBMC is ruled by the BJP.

"Sena corporators not only damaged the Standing Committee meeting room but also ransacked my office. They abused us despite the fact that I am a woman," the mayor said.

Local MLA Narendra Mehta of the BJP has also condemned the incident. "The BJP should not fight the upcoming assembly elections in alliance with the Sena," he said.

Promoted
Listen to the latest songs, only on JioSaavn.com
Comments
Shiv SenaBJPThane