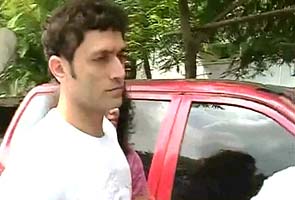 Mumbai: Actor Shiney Ahuja has been convicted by a Mumbai court for raping his domestic help. He has been sentenced to seven years in prison. The actor broke down after the judge pronounced him guilty; his wife, Anupam, knelt on the floor to console him.

From court, Ahuja was taken to jail.

In June 2009, an 18-year-old who had been hired by the actor and his wife to work for them at their residence said that she had been raped by Shiney while his wife was away.

DNA tests confirmed the rape. Ahuja was arrested. In his bail application, he said that the sex had been consensual, and that the rape charges were aimed at extortion.

Ahuja was granted bail by the Bombay High Court in October 2009, and was asked to stay away from Mumbai so that he would not be able to influence the victim.

Ahuja and his wife have both insisted that he is innocent.

And in 2010, their story was backed by the victim, who said in court that she had framed the actor at the urging of a friend who had a grudge against him.

Promoted
Listen to the latest songs, only on JioSaavn.com
However, the court relied on medical tests that established rape. The implication was that the victim had been threatened or bought into turning hostile.

Ahuja is certain to appeal against today's verdict. His career, however, which had choked earlier, is unlikely to be resuscitated.
Comments
Shiney Ahuja convicted for rape