Protests were also held in different parts of the city as severe water scarcity continued. Locals also expressed their anger on social media with some asking tourists to stay away from the hill town. 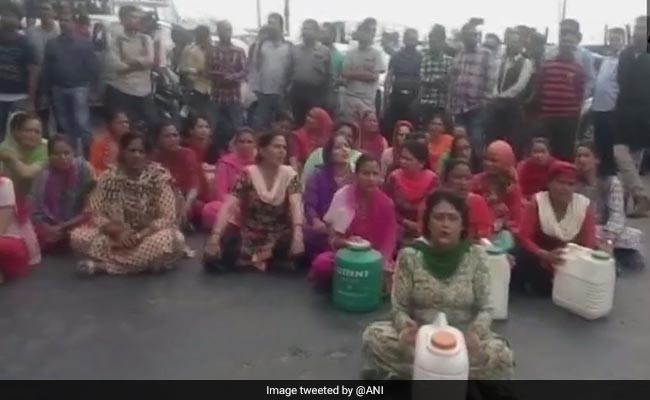 Shimla: Following an acute water shortage in Shimla over the past several day, residents today blocked the national highway 5 near Kachi Ghati.

Protests were also held in different parts of the city as severe water scarcity continued. Locals also expressed their anger on social media with some asking tourists to stay away from the hill town.

Earlier in the day, the municipal corporation distributed water under police protection. Over 70 police personnel have been specifically deployed to deal with the situation in the water-deprived hill-station.

The tourism industry in Himachal Pradesh's Shimla has also been massively hit as tourists are cancelling their visits to the hill-station. On Wednesday, Himachal Pradesh High Court directed the Shimla Municipal Corporation not to distribute water through tankers.

The court has taken a suo moto cognizance in the matter due to extreme water scarcity in the town and has given order taking the Public Interest Litigation (PIL) which is pending with the high court for past two years.

The Shimla administration has also postponed a major tourist attraction, International Shimla Summer Festival, scheduled from June 1 to 5 due to the scarcity of water.

The Centre has also sought a report from Himachal Pradesh government on the issue.

Promoted
Listen to the latest songs, only on JioSaavn.com
Shimla authorities has deployed 27 tankers to distribute 2.25 lakh litres of water at 63 points in the city. The total availability of water from all sources in Shimla now is 21.75 million litres per day against a requirement of 32-35 MLD.