Sheikh Abdullah has been the symbol of Kashmir's accession to the Union of India and is credited with driving tribal raiders out with the help of his volunteers who fought Pakistani raiders and foiled their attempt to capture Kashmir in 1947. 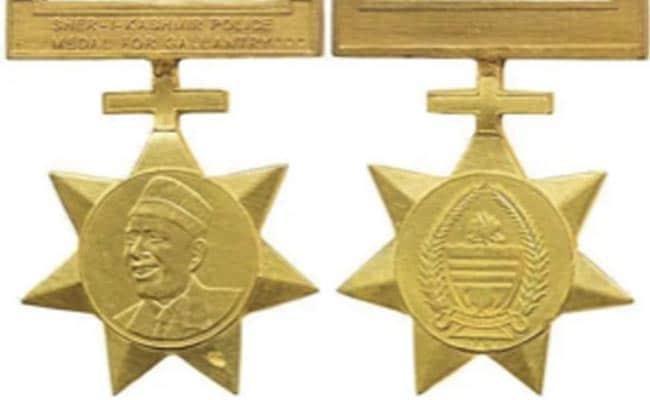 The medal has also been renamed the Jammu and Kashmir Police medal.

Jammu and Kashmir's police medal for gallantry and meritorious services will no longer have an embossed image of Sheikh Mohammad Abdullah, instrumental to Kashmir's accession to India following the partition.

The move has drawn sharp criticism from regional parties, the National Conference - the outfit that Sheikh Abdullah founded, and even long-time rival the Peoples' Democratic Party or PDP.

Architect of the Naya Kashmir doctrine that heralded the transformation of the territory from an absolute monarchy to a constitutional democracy, Sheikh Abdullah rejected the two-nation theory in 1947 and ensured that the Muslim majority region became part of India.

The order to replace the Sheikh's embossed picture was issued by Jammu and Kashmir Home Department.

"Sher-i-Kashmir Sheikh Mohammad Abdullah embossed on one side of the medal shall be replaced with the National Emblem of Government of India and other side inscribed with the J&K State Emblem shall be inscribed as Jammu and Kashmir," read the order.

The Sheikh has been the symbol of Kashmir's accession to the Union of India and is credited with driving tribal raiders out with the help of his volunteers - women and men - who fought Pakistani raiders and foiled their attempt to capture Kashmir in October 1947.

He stood against Pakistani raiders even when Maharaja Hari Singh fled Kashmir following the tribal invasion and strongly opposed Mohammad Ali Jinnah's two-nation theory of dividing India on the lines of religion and chose to be part of a secular state.

Political parties in Jammu and Kashmir said that removing the Sheikh's picture and renaming the police medal will not erase his contributions and historical significance.

"BJP's Panglossian view of rewriting the history by name-changing may favour their narrow communal agenda, but it cannot absolve its complicity from annals. You cannot erase the contributions and historical significance of Sher-i-Kashmir by petty name changing gimmicks," tweeted Mohammad Yousuf Tarigami of the Communist Party of India-Marxist (CPI-M).