"Who Will Save This Economy": Shatrughan Sinha Returns As Centre's Critic

India's economic growth has slowed in the past three consecutive quarters and several sectors have been hit hard. 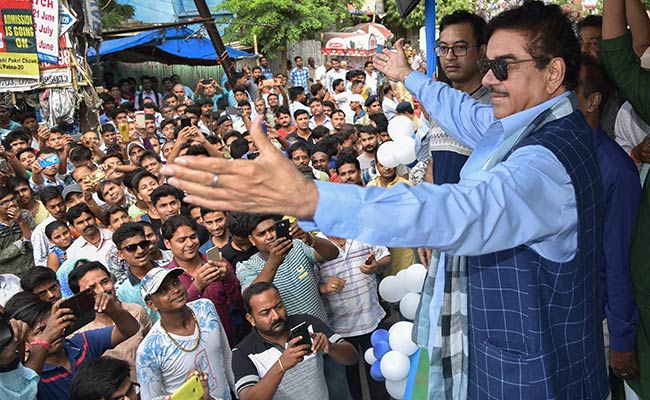 Actor-politician Shatrughan Sinha, who surprised many with generous praise for Prime Minister Narendra Modi for his Independence Day speech, returned to form on Sunday, with a piercing critique on the state of the economy. Known for his biting comments on Twitter against PM Modi and his BJP-led government, the Congress leader had called his address from the Red Fort on August 15 "courageous, well-researched and thought-provoking".

"Sir, the economic slowdown clearly seems to be everyone's talking point right now... Don't you think we should do something about it?" Mr Sinha said, starting a series of tweets.

Sir, the economic slowdown clearly seems to be everyone's talking point right now.....Don't you think we should do something about it?
Financial institutions and markets are in a churn, private sector businesses have become apprehensive and even common households are looking up

to your government to salvage a situation that has now adversely affected several key sectors and industries - from agriculture to automobiles, soaps to shampoos, and textiles to even biscuits.....
Production cut backs and layoffs have become norm of the day with Textiles,

Aviation, Automobile, Non-Banking Finance and consumer goods industries hurting the most. The ripple effects of this slowdown has spiked the unemployment rate to over 6%, an all time high in 45 years.....over 30 million people are jobless!

A grim testimony of the economic situation is Parle G's decision to layoff over 10,000 people from its workforce due to declining consumer demand of the biscuits that we all grew up eating!....the cookie has indeed started to crumble!

The Indian Aviation industry is reeling under its worst meltdown ever.....these are just nibbles of the snowballing effect.

What caused this mess?Demonetisation? GST? Policies?
We keep pondering....but we also know that you, Honourable Prime Minister Sir, are the Hero

who will save this economy.....
Please propose a detailed roadmap/structural stimulus package to revive a volatile and struggling economy.
If you believe that champions from across the country and people like me can be of any assistance to help you achieve this goal,

we're more than happy to help!

The former BJP lawmaker from Patna Sahib had joined the Congress earlier this year, after years of open dissent with the BJP. An arch-critic of the Prime Minister, Mr Sinha had earlier dubbed the BJP a "two-man army, one-man show".

But his tweet on PM Modi's Independence Day speech read: "Since I'm famous or infamous for calling a spade a spade, I must admit here, Hon'ble PM that your speech from the #RedFort on 15th Aug'19 was extremely courageous, well researched & thought provoking. Superb delivery of the key problems facing the country."

Mr Sinha was the latest in line of public figures expressing concern at India's flagging economic growth that has slowed in the past three consecutive quarters, losing its status as the world's fastest-growing major economy to China, with unemployment at its highest since the 1970s, according to government data.

The automotive sector is particularly stricken, with car sales plunging 31 percent in July, the ninth consecutive monthly drop, prompting manufacturers to halt production at some plants.

India's largest biscuit maker Parle Products warned this week that it might have to lay off up to 10,000 workers if the government doesn't cut sales taxes.