Shatabdi is the heart of Indian railways: Lonely Planet 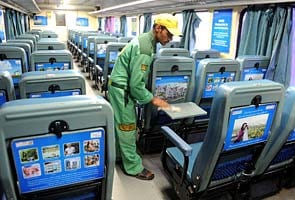 New Delhi: One of the best ways to see India is to undertake a train journey, and the Shatabdi Express - the heart of Indian railways - is one such rail network that offers one of the best options for domestic travellers, says travel guide book Lonely Planet.

The first in the series of pocket books titled, "Holidays by Shatabdi" was recently launched in the capital as a guide to destinations easily reachable by Shatabdi from Delhi, Bangalore and Chennai being next in the series.

"After the launch of our Lonely Planet for the Indian Traveller series last year and Short Escapes travel guides series in March 2013, we decided to tap those tourists who use the services of Shatabdi Express to travel to destinations in the sub-continent," says Sesh Sheshadri, General Manager, Lonely Planet India.

"Shatabdi Express being one of the most popular trains in this genre was first on our mind when we decided to come out with a guide for train travellers.'Holidays by Shatabdi' enables travellers to make the most of their trips by visiting destinations near the city. The first in the series is for travellers who board Shatabdi from Delhi," he added.

Also on the agenda are a set of books that can take the cinema loving tourist to places inside the country that have a Bollywood connection.

"The 'Bollywood Escape' series will focus on places which are known for some bollywood connection, be it a shooting spot for any movie or something other," Sheshadri told PTI.

According to him, whenever we think about luxury travelling from Indian railways the international tourists zero down on options like Deccan Queen, Maharaja Express or Palace on wheels.

"But we cannot ignore the domestic travellers for whom Shatabdi can also be an option for luxury and comfortable travelling, " he said adding, "the domestic market is much bigger considering the number of Indian rail travellers every year and hence our effort is to provide the travellers, the benefit of travelling with authentic information.

The guide being pocket size is a quick read for anyone on the go and enables travellers to make the most of their time by exploring destinations close to Delhi. The travel guide lists all the must see tourist destinations with comprehensive details about places to stay, food, and shopping.

Priced at Rs 140 each, the guide also features value-for-money suggestions for travellers along with expert travel tips and advice. It gives a detailed picture of fun filled activities for all interests and age groups.

Compiled by a team of five travel writers including Juhi Saklani, Karuna Ezara Parikh, Parvati Sharma, Puneetinder Kaur Sindhu and Sarah Islam, the guides are produced in full colour and packed with photographs to inspire the readers to pack up their bags and board Shatabdi.