The BJP Yuva Morcha activists, shouting slogans, barged into the office and even tied a banner saying "Hindu Pakistan" office. 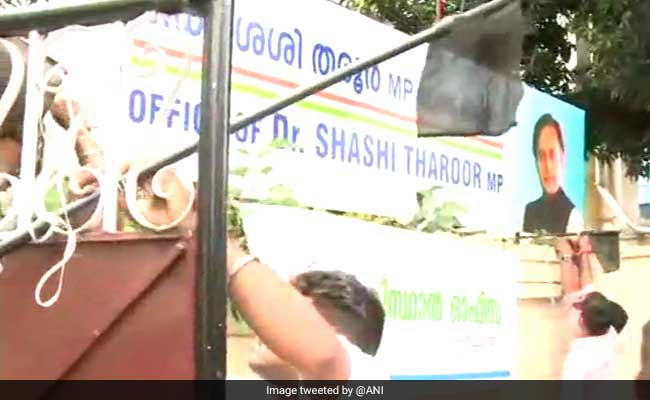 BJP youth activists on Monday smeared black oil on Congress lawmaker Shashi Tharoor's constituency office here over his comment that a "Hindu Pakistan" would be created if the ruling party at the Centre returned to power.

Mr Tharoor, however, was not present in the office when the incident took place. He was attending other functions in the city.

The BJP Yuva Morcha activists, shouting slogans, barged into the office and even tied a banner saying "Hindu Pakistan" office.

Thiruvananthapuram district BJP President S. Suresh said the incident was a protest against a wrong statement.

"This protest took place as Tharoor is the Lok Sabha member from here and hence this is nothing but a natural protest because of his erroneous statement," said Mr Suresh.

Senior Congress legislator V.D. Sateeshan told the media that the incident was a show of the BJP's arrogance.

Speaking on "Threats faced by Indian Democracy and Secularism" at an event in the city last week, Mr Tharoor said: "The great danger is that if they (the BJP) are able to win a repeat of their current strength in the Lok Sabha, then frankly our democratic constitution as we understand will not survive because they will have all the three elements they need to tear up the Constitution of India and write a new one.

"That will be a new one which will enshrine the principle of Hindu Rashtra, will remove equality for minorities, that will create a Hindu Pakistan."

On July 14, a Kolkata court summoned Mr Tharoor following a petition dubbing the leader''s comments as "a deliberate and malicious act " that was "intended" at "outraging" religious feelings.