Both Shashi Tharoor and Digvijaya Singh are likely to file their nomination papers for the Congress president election tomorrow. 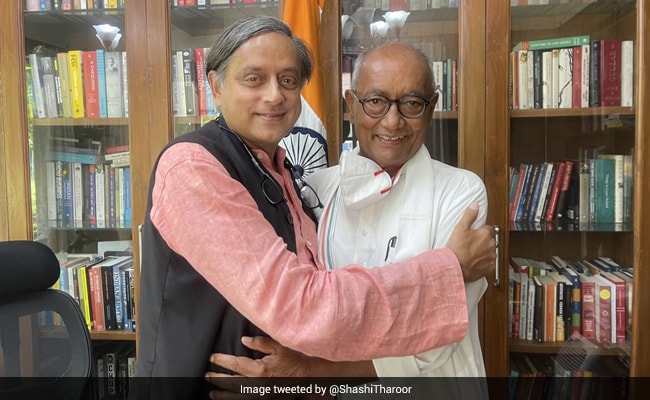 New Delhi: Amid hectic meetings in the run-up to the Congress president election, senior party leaders Shashi Tharoor and Digvijaya Singh -- both contenders for the top post -- met and wished each other the best for the upcoming contest.

Received a visit from ⁦@digvijaya_28⁩ this afternoon. I welcome his candidacy for the Presidency of our Party. We both agreed that ours is not a battle between rivals but a friendly contest among colleagues. All we both want is that whoever prevails, @incIndia will win!✋🇮🇳 pic.twitter.com/Df6QdzZoRH

I agree @ShashiTharoor we are fighting the Communal Forces in India. Both believe in the Gandhian Nehruvian Ideology and shall fight them relentlessly come what may. Best wishes. @INCIndia@RahulGandhi@priyankagandhi@Jairam_Rameshhttps://t.co/5KHn6P8Yug