Shashi Tharoor, the Congress MP from Kerala's Thiruvananthapuram, took to Twitter early this morning to share glimpses from Vidyarambham and said a number of toddlers were brought to his house to be initiated in writing. 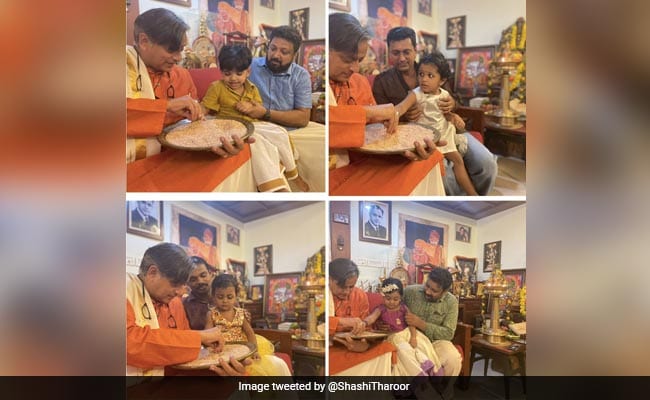 Kerala Congress MP Shashi Tharoor celebrated Dussehra or Vijaya Dashami "in the right spirit" by marking the long-standing tradition of Vidyarambham. People in Kerala mark the last day of the Navratri festival as Vidyarambham, which means introduction to education, when children are initiated into the world of books and literacy.

The Vidyarambham ritual includes making a child write the first letters on a plate of rice. According to the custom, scholars, writers, teachers and priests make children, between two-three years of age, write their first letters.

Mr Tharoor, 65, took to Twitter early this morning to share glimpses from the auspicious day and said a number of toddlers were brought to his house to be initiated in writing.

"Started VijayaDashami day in the right spirit, honouring learning as the way to overcome the forces of darkness. A number of toddlers were brought home to be initiated in writing. As I do every year in Thiruvananthapuram, I traced with their little fingers the words 'Om Shri' in three scripts," he tweeted, along with pictures from the occasion.

Not all the toddlers were all happy to be force-fed thier literacy by a stranger, but most were caught up in the mood of "Vidyarambham" and their parents' enthusiasm! pic.twitter.com/pl5TtCbki6

In Mr Tharoor's post, children could be seen sitting on one of their parent's lap while the Congress leader, clad in traditional clothes, helped them write on a plate of rice. While many kids looked amused and eager, others were seen crying as their parents tried to helped them get into a festive mood.

"Not all the toddlers were all happy to be force-fed their literacy by a stranger, but most were caught up in the mood of 'Vidyarambham' and their parents' enthusiasm!" Mr Tharoor added.

He later visited the Saraswati Mandapam, Poojappura, temple to continue the rituals there.

A devotional morning on VijayaDasham/Dussehra day began at home & proceeded to the temple. Now begins the work day including a flight back to Delhi! pic.twitter.com/6UF2c6Yfo0

The Congress MP has been taking part in the ritual since the past few years but he was unable to do so last year due to the ongoing coronavirus pandemic.

Vidyarambham is performed at various temples, schools and cultural centres across Kerala where a large number of people take their toddlers for the initiation ceremony. However, due to Covid outbreak, the number of people has been restricted this year at public places.

BJP Building Airports Only To Sell Them Off: Akhilesh Yadav