The veteran leader also reacted sharply over the role of the governor and the relations between his office and the state government. 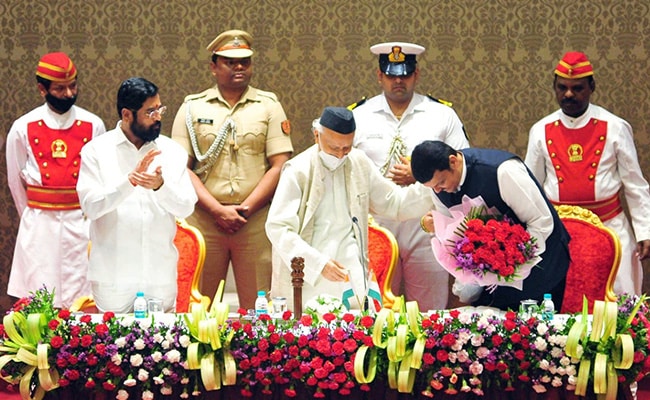 Mr Pawar was speaking to reporters in Pune.

“I saw the swearing-in ceremony of Eknath Shinde and Devendra Fadnavis on television. He (the governor) fed them 'pedha' (sweet) and greeted them with a bouquet. It seems there are some qualitative changes in him,” the NCP chief said.

Recalling the swearing-in ceremony of leaders of Maha Vikas Aghadi after the 2019 polls, Mr Pawar said, "I was present there. Koshyari had objected to some prospective ministers taking oath mentioning the names of some icons or public figures. He even pointed at me at that time and asked them to take the oath only as per the format".

However, when Eknath Shinde took the oath on Thursday, he mentioned the names of the late Balasaheb Thackeray and the late Anand Dighe, "but Koshyari didn't object this time," Mr Pawar said.

The veteran leader also reacted sharply over the role of the governor and the relations between his office and the state government.

“The decision of the state council of ministers is always binding on the governor. The MVA government had recommended a list of 12 persons to be nominated as members of the Legislative Council from the governor's quota. However, he never approved the list. It has been said that he would take quick decisions with the new government formed in the state,” Mr Pawar quipped.

“This is clearly in contradiction to his own oath while assuming the office. A governor should be neutral while treating the people of varied political backgrounds,” he added.