Mahesh Kothe, a former Sena leader, and his associates met Mr Pawar but did not join the party, sources said. 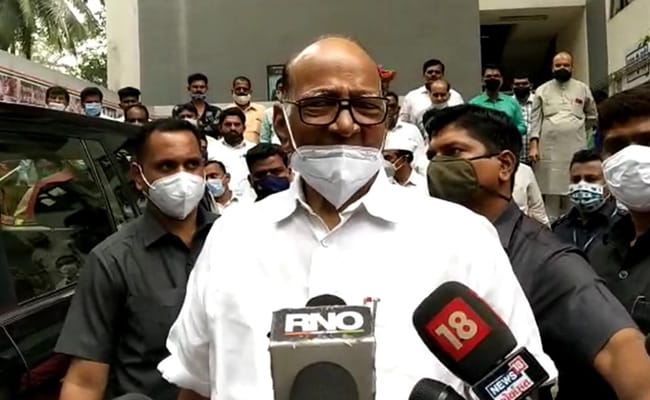 A tweet on NCP chief Sharad Pawar's Twitter account on Friday informed about a former Shiv Sena leader from Solapur joining the party, but it was deleted later.

Mahesh Kothe, a former Sena leader, and his associates met Mr Pawar but did not join the party, sources said.

As Sena, NCP and Congress share power in Maharashtra, workers and leaders of one party crossing over to another has created tensions in the alliance in the past.

Media reports said Mr Kothe on Thursday announced that he was leaving the Shiv Sena. On Friday, the Sena's Solapur unit announced his expulsion.

Mr Pawar, in a tweet in Marathi on Friday, said, "Leader of Opposition in Solapur Municipal Corporation, Mahesh Kothe, and his colleagues joined the Nationalist Congress Party today. Welcome all into the party and the Maha Vikas Aghadi."But later the tweet disappeared.

"Mr Kothe met Mr Pawar, but did not join the party. So the tweet was deleted by Pawar's social media team," said an NCP source.

In another tweet, Mr Pawar said that Solapur city used to follow the ideology of leaders like Mahatma Gandhi and Jawaharlal Nehru, but its face "changed'' due to some people inspired by the BJP's ideology.

Mr Kothe and his associates are working to solve issues faced by the people, Mr Pawar said.

PM Modi's Visit To Bangladesh Will Be A Very Memorable One: S Jaishankar