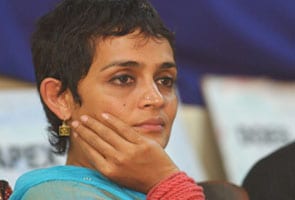 New Delhi: Writer Arundhati Roy, Hurriyat hawk Syed Ali Shah Geelani and others were on Monday booked on charges of sedition by Delhi Police for their "anti-India" speech at a seminar here last month.

The filing of the FIR came following a directive from a local court on Saturday on a petition filed by Sushil Pandit who alleged that Geelani and Roy made anti-India speeches at a conference on "Azadi-the Only Way" on October 21, a senior police official said. (Read: Court asks police to file case against Arundhati Roy)

Roy and others were charged under sections 124A (sedition), 153A (promoting enmity between classes), 153B (imputations, assertions prejudicial to national integration), 504 (insult intended to provoke breach of peace) and 505 (false statement, rumour circulated with intent to cause mutiny or offence against public peace.

"These sections have to be read with Section 13 of the Unlawful Activities Prevention Act of 1967," the official said.

Roy and Geelani had shared the dais with Maoist sympathiser Vara Vara and others. Geelani was heckled by the audience.

With the case being registered, Roy and others now face arrest. The sections invoked are non-bailable and if arrested, they have to approach court for bail.

The maximum punishment, if convicted, is life imprisonment for the offence.

Government had earlier decided not file any case against Geelani and Roy as such a move would give unnecessary publicity to them and the handle to the separatists in the Valley, officials sources said.

Promoted
Listen to the latest songs, only on JioSaavn.com
The Union Home Ministry had sought legal opinion on the issue which suggested that a case could be made out under sedition. However, after taking political opinion, the Ministry decided not to file any case against Geelani and Roy.

Earlier reacting to the court order, Roy has said that perhaps they should "posthumously file a charge against Jawaharlal Nehru" and cited 14 instances where the first Prime Minister has said about "the question of accession in any disputed territory or state must be decided in accordance with wishes of people".