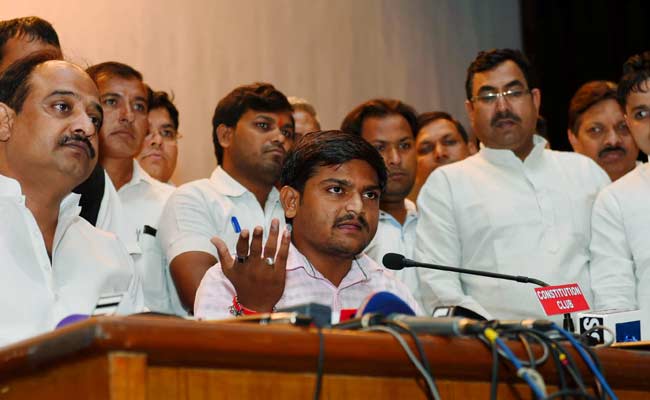 Hardik Patel today said that he and his supporters have got tickets for the match and will go to the stadium.

Rajkot/Ahmedabad: Ahead of the third one-day international or ODI match between India and South Africa today, the Rajkot administration yesterday banned mobile internet services in the district. The services will remain suspended from 10pm tonight till the end of the match.

The ban comes a day after Patel quota agitation leader Hardik Patel threatened that he would block the way of Indian and South African cricket teams to the Saurashtra Cricket Association (SCA) stadium and not let them enter the venue.

Rajkot stadium has also been fortified to ensure smooth conduct of the match.

The 22-year-old leader yesterday said that he and his supporters have got tickets for the match and they will go to the stadium.

He has also urged the Patel community members to remain present in large numbers during the match to raise their demand for reservation under OBC quota for which they have been agitating over last two months.

"We have asked around 50,000 community members to rush to the SCA stadium tomorrow (Sunday) for agitation," the Patidar Anamat Andolan Samiti (PAAS) convener had said.

"My match ticket has been purchased by Rajkot unit of PAAS and I am going to attend the match tomorrow," he said.

In the wake of the threat and the violence that the state witnessed recently over the quota stir, police have fortified the stadium, located on the outskirts of Rajkot city at Khandheri village, which will host the third ODI match under the Gandhi-Mandela freedom series.

Besides, three drone cameras and 90 CCTVs have been installed at the stadium to closely monitor each and every movement of the viewers, he said, adding that if any police personnel on duty is caught watching the match instead of monitoring the crowd, will be punished.

Meanwhile, Hardik's close aide Dinesh Patel had said yesterday that PAAS conveners of Saurashtra region and other associates will go to watch the match and if they are stopped, the state government will have to face the wrath of the Patel community.

"Hardik and members of PAAS, including Chirag Patel, Ketan Patel and myself have obtained tickets of the match and we will surely go to the venue tomorrow (Sunday).

"If we are stopped or detained tomorrow, then our Patel community members will hold protest against the state and their police, who will then face our wrath," Dinesh said.

When asked whether their stir will spoil the country's image, Mr Dinesh said, "We believe that the world should see how the Patel community is being harassed in the so-called development model of Gujarat".

He also expressed apprehensions that the Bharatiya Janata Party (BJP) workers would cause a disruption at the stadium and blame Patels for that.

"We have reports that BJP men will create a ruckus at the match venue and they will blame us for that. They are going to spoil the image of the country, we will never wish that," he said.

"This is a sport event and thus this is not a proper platform to agitate for such a demand. I humbly urge Hardik not to agitate during the Rajkot match and I am confident that he would consider my request," Mr Shah told reporters.

Rajkot district collector Manisha Chandra has asked officials with magisterial power to ensure that the match is played in a peaceful atmosphere.