Section 377 Verdict In Supreme Court Today: A Timeline Of The Case

Section 377 case timeline: The Supreme Court will today decide whether GAY SEX (homosexuality) will remain a crime in India. 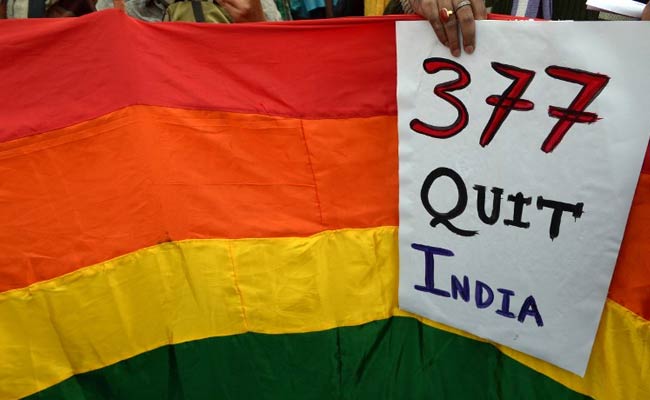 The Supreme Court will today give Section 377 verdict, a controversial British-era law that criminalises gay sex. Gay sex is punishable by up to 10 years in jail under the 1861 law. Five high-profile petitioners - Bharatnatyam dancer Navtej Singh Johar, journalist Sunil Mehra, restaurateur Ritu Dalmia, Neemrana hotel chain co-founder Aman Nath and businesswoman Ayesha Kapur - argue that Section 377 violates the rights enshrined in the Constitution. The Supreme Court began hearing petitions against the ban in July and had earlier said that "If section 377 of the IPC goes away entirely, there will be anarchy. We are solely on consensual acts between man-man, man-woman. Consent is the fulcrum here."

Here's the timeline of the Section 377 case:

Naz Foundation, an NGO that work on HIV/AIDS and sexual health issues, files a petition in the Delhi high court against Section 377.

In 2009, the Delhi High Court described Section 377 as a violation of the fundamental rights guaranteed by the constitution. Religious groups, however, had appealed against the decision in the Supreme Court.

That Delhi High Court judgement was overturned by the Supreme Court in December 2013. It said that amending or repealing Section 377 should be a matter left to Parliament, not the judiciary.

In February 2016, the three-member bench headed by then the Chief Justice of India TS Thakur said that all the curative plea of NGO Naz Foundation and some gay rights activists will be reviewed afresh by a five-member constitutional bench.

In August 2017, the Supreme Court held Right to Privacy as a fundamental right. Sexual orientation, the court said, is an "essential component of identity" and the rights of lesbian, gay, bisexual and transgender population are "real rights founded on sound constitutional doctrine".

2018: Supreme Court Hears Petitions on Section 377
In July, the Supreme Court reconsiders its 2013 decision and begins hearing petitions challenging Section 377. In one of the hearings, Chief Justice of India Dipak Misra indicated that the 150-year-old ban on gay sex may soon be gone. "We intend to rule, subject to arguments, that two consenting adults even if engaged in 'unnatural sex' will not be liable for prosecution for any offence," Chief Justice Misra had said. The top court reserved its verdict after hearing the petitions.