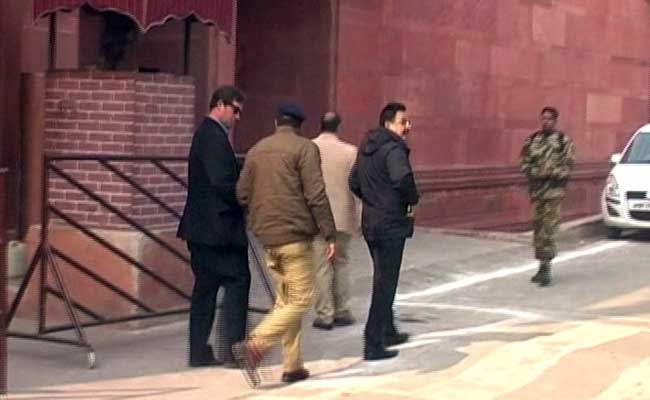 US Secret Service agents along with Agra Police commandos on a recce of Taj Mahal ahead of President Obama's visit.

Agra: Barack Obama is the first US president to visit India twice while in office. His three-day visit will include a townhall in Delhi with students among the audience, a private dinner with Prime Minister Narendra Modi at his residence a day -long trip to the Taj Mahal with his wife Michelle.

President Obama lands in Delhi on January 25.  That night, he's expected to dine with PM Modi at 7 Race Course Road.  On the 26th, he will be the Chief Guest at the Republic Day celebrations pivoted on the massive military parade on Rajpath in the heart of the capital.

On the 27th, he will address about 1,500 people at Delhi's Siri Fort auditorium on the benefits of a close working relationship between India and the US.

If it's foggy, the 165-kilometre freeway from Delhi to Agra, which allows a two-hour journey between the two cities, could be made off-limits to the public so that the Presidential convoy can use it, if needed.  While President Obama is in Agra, it will be a no-fly zone for commercial airlines.

The Taj Mahal will be made exclusively available to President Obama. The monument will shut down for the public but timings have yet to be shared by officials.  It is likely to reopen for tourists on the 28th.

In Agra, Secret Service agents yesterday completed a recce of the Taj Mahal; they were accompanied by commandos of the Agra Police.
All hotels in the city have been asked to ensure that their security cameras are working and that complete lists of guests are maintained and shared with local intelligence officials.  Security has been increased at train and bus stations.

Sources say that a letter warning of a terror attack "somewhere" on the highway from Delhi to Agra was received by intelligence agencies but is not being seen as a credible threat.  However, there will be huge security along the freeway.

Special security personnel and sharp shooters will be placed in high-rises in Agra.

The President will fly out of Delhi on the 27th.