The Aam Aadmi Party (AAP)'s Devinder Singh Sehrawat joined the BJP on Monday, becoming the second lawmaker of the party to switch in less than a week. 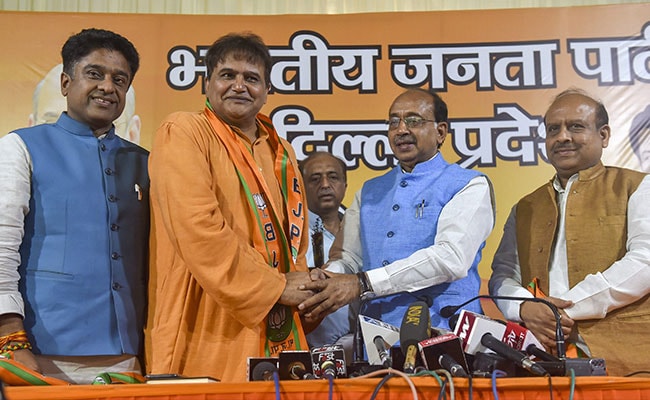 The exits have hit AAP just days before voting in Delhi on May 12 for the national election.

The Aam Aadmi Party (AAP)'s Devinder Singh Sehrawat joined the BJP on Monday, becoming the second lawmaker of the party to switch in less than a week. Earlier, another lawmaker, Anil Bajpai, had crossed over from AAP to the BJP.

Like his colleague, Devinder Singh Sehrawat also joined in the presence of Union Minister Vijay Goel. The lawmaker from Delhi's Bijwasan constituency said he felt slighted in the party he helped set up.

"I am one of the founding members of AAP. One of the executives. In the last three years, I was insulted and the needs of my constituency were neglected," Retd Colonel Sehrawat said.

Accusing the party of "ignoring" and "cornering" him, he added that he was "not even invited for party functions".

Sehrawat was suspended by AAP in 2016 for anti-party activities. He had written to Delhi Chief Minister Arvind Kejriwal alleging there were leaders in the party in Punjab who were exploiting women in return for tickets.

Last week, Anil Bajpai, walked out of AAP a day after Arvind Kejriwal derided what he called the BJP's attempts to "buy AAP leaders".

"I worked with the AAP for many years. I was hurt by the lack of respect and the peculiar functioning of the party. It has detracted from its original path," said the lawmaker from Delhi's Gandhi Nagar.

The exits have hit AAP just days before voting in Delhi on May 12 for the national election.

The party's Manish Sisodia, the Deputy Chief Minister of Delhi, had alleged that seven lawmakers had been offered 10 crores by the BJP to switch sides.

Arvind Kejriwal had tweeted: "Modi ji, will you topple every government run by an opposition party by buying lawmakers? Is this your definition of democracy? And from where do you bring so much money to buy MLAs? You have tried to buy our MLAs many times. Buying AAP leaders is not easy."

Vijay Goel, countering the charge, said AAP lawmakers wanted to quit their party out of "frustration and humiliation", so the BJP "did not need to buy them".

All 7 Lok Sabha seats in Delhi will vote in a single phase in the sixth round in the seven-phase election that ends on May 19. The results will be declared on May 23.