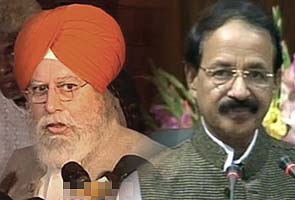 The two senior politicians were coming out of a meeting of the Parliamentary Standing Committee on Unique Identity Number (UID), when Alvi alleged that Ahluwalia had leaked the committee report to the press.

Mr Alvi alleged the BJP leader had leaked the report of the standing committee to the press and he received a call on his phone from a man thanking Ahluwalia for the report. "Report is confidential unless it is presented in parliament. But I got calls from some reporters and they talked to me, thinking I am Ahluwalia," Mr Alvi told reporters later.

"I did not respond...this is against the dignity of parliament and parliament members. I think he did not realise what he was doing and what message will go to people," Mr Alvi said.

Mr Alvi will meet senior BJP leader LK Advani tomorrow at around 12:30 pm. Mr Advani has reportedly spoken to Mr Ahluwalia to get his version of the incident.

Mr Ahluwalia has rebutted the charge of having leaked the report and said he was trying to take Mr Alvi's phone to see the number. "The charge against me is false; this is my 24th year in parliament. I have never leaked a report; if I leak a report, I will openly say I have given that," he said.

"He said I have proof Ahluwalia has leaked the report. He said someone called up on his number and said 'thank you very much Mr. Ahluwalia, you gave us the report'. I asked him to give the number and name of the person, he refused to do that," the BJP leader told a news channel.

"All journalists were standing there; he again dialled some number and said 'you wanted to talk to Mr. Ahluwalia'. I asked who the person is but he refused to tell. I wanted to take the number from his phone," he said.

Promoted
Listen to the latest songs, only on JioSaavn.com
Mr Ahluwalia also said he was ready for any media trial. "Ask him which journalist called him, take the number, ask the journalist. I am ready to face any media trial for it," the BJP leader declared.

While Mr Alvi is a spokesperson for the Congress, Mr Ahluwalia is the deputy leader of opposition in the Rajya Sabha.