The farmers are demanding a loan waiver, subsidised electricity and fuel, pension for farmers above 60, and implementation of the Swaminathan Commission recommendations on the minimum selling price for crops. 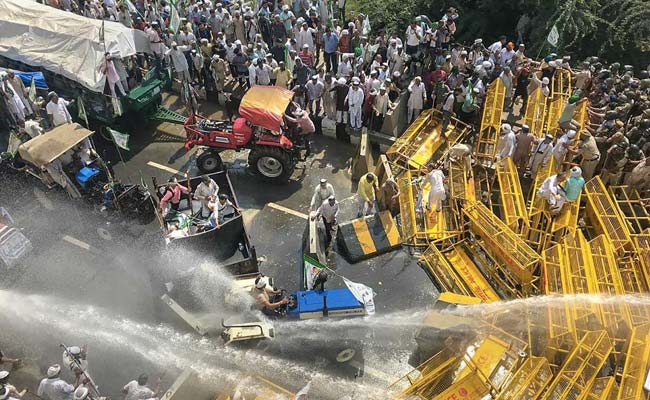 All schools and colleges in Ghaziabad will remain closed on Wednesday due to the ongoing farmers' protest at the Delhi border, the district administration has announced. The decision was taken after at least 30,000 agitating farmers trying to enter Delhi from Uttar Pradesh were held at bay, giving rise to clashes with the police. Although the government promised to consider the farmers' demands, the latter expressed dissatisfaction and said that the agitation will continue.

"Schools and colleges in Ghaziabad will remain closed tomorrow on account of the ongoing Kisan Kranti Padyatra," a statement issued by the administration read. Ironically, the clashes that spurred this decision occurred on a day when the entire nation was paying its respects to Mahatma Gandhi -- an ardent proponent of non-violence.

The farmers are demanding a loan waiver, subsidised electricity and fuel, pension for farmers above 60, and implementation of the Swaminathan Commission recommendations on the minimum selling price for crops.

Although the farmers were supposed to end their rally at Kisan Ghat, the memorial of farmer chief Chaudhary Charan Singh, they were stopped at the heavily barricaded Delhi-Uttar Pradesh border. Sloganeering farmers tried to push their way through, forcing the police to use batons, tear gas shells and water cannons to disperse them. Several protesters and policemen were injured in the process.

Although Union Home Minister Rajnath Singh promised to look into the demands at a meeting with representatives of the Bharatiya Kisan Union (BKU), the farmers were not convinced. "We had a discussion on 11 points. The government agreed on seven but didn't agree on the rest. They said they will get back to us after a discussion because it was a financial matter," said BKU spokesperson Yudhvir Singh.

The Opposition leaders were quick to target the BJP government over the violence. Congress president Rahul Gandhi condemned the way in which police had attacked the farmers while they were "peacefully marching to register their protest on the International Day of Non-Violence".

"Peaceful and unarmed farmers going towards Raj Ghat were brutally treated, they were lathicharged and teargas shells fired on them. We condemn this," said KC Tyagi of the Janata Dal (United).

Even Delhi Chief Minister Arvind Kejriwal demanded that the farmers be allowed to enter. "This is wrong. Delhi belongs to everybody. Farmers cannot be stopped from coming to Delhi. Their demands are valid and should be agreed upon. We are with the farmers," he said.