The girl, Fiza, a Class 7 student of the Sarvodaya Kanya Vidyalaya, in Old Delhi, was rushed to the LNJP Hospital. 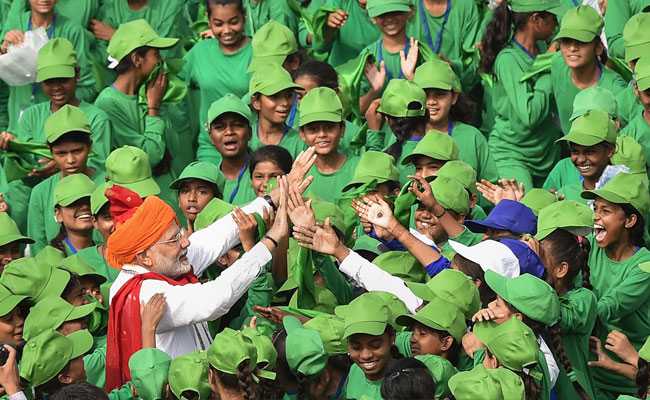 PM Modi ventured forth into the crowd of children, who had come to perform, and shook hands with them

A 13-year-old school girl, who had come to perform in the Independence Day celebrations at the Red Fort, fell unconscious due to heat and dehydration, while an exhausted photojournalist collapsed when Prime Minister Narendra Modi was delivering his address at the venue today.

The girl, Fiza, a Class 7 student of the Sarvodaya Kanya Vidyalaya, in Old Delhi, was rushed to the Lok Nayak Jai Prakash Narayan Hospital (LNJP).

"She collapsed when the national anthem was about to end. A few of us and a staff member carried her off on a stretcher to an ambulance soon after the event," Ariba, a fellow student, said.

Ariba had also come to participate in the event, and the episode left her inconsolable.

"We (75 participants) came to the Red Fort at the crack of dawn to practice for the main event, and so were very exhausted. The heat and humidity made things worse. Fiza was very thirsty but couldn't get water, and suddenly collapsed on the ground," she told news agency PTI.

Doctors from the Centralised Accident Trauma Services Ambulance service examined her and sent her to the hospital, citing "dehydration".

The photojournalist, who had collapsed due to heat and exhaustion while PM Modi was delivering his last Independence Day address ahead of the next Lok Sabha elections, later regained consciousness, but chose to remain laid on the ground for some time.

The celebrations began around 7 am but spectators, many of whom traveled long distances to attend the event, had to be present at the venue by 6:30 am as per instructions issued.

Many students and visitors complained that drinking water was not readily available.

"We had to really struggle to get a bottle of water. We were tired from the practice, and then the thirst and the heat made it more difficult," a girl student from another school, who did not wish to be named, said.

According to the Met Department, at 5:30 am, humidity was at 72 percent and it was 88 percent a couple of hours before that.

The prime minister, who arrived at around 7:15 am at the Red Fort premise, was seen wiping his face with a handkerchief several times during his speech from the ramparts of the Red Fort.

Colourful bamboo fans, handcrafted by artisans of the Mahali tribe of West Bengal, were provided to the invitees, including ministers, parliamentarians, diplomats and other VIPs to beat the heat.

PM Modi, after his speech, ventured forth into the crowd of children, who had come to perform, and shook hands with them.

"It was a such a happy moment for me and my friend (Fiza) being part of the event, but she is unwell now, and so we cannot go back feeling very happy about it," Ariba said.