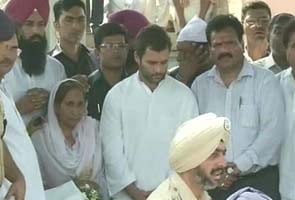 Bhikiwind, Punjab: Sarabjit Singh's wife and two young daughters clung to the coffin that held his body and wept. His sister, Dalbir Kaur, who fought hard for years to secure his release from a Pakistani jail, bowed her head. Several Punjab policemen in uniform then carried away Mr Singh's body, draped in the Tricolour, for the final rites.

In a sea of funeral white, the khaki of many cops stood out as top politicians arrived. Among them a grim Congress vice-president Rahul Gandhi and Punjab Chief Minister Parkash Singh Badal with his entire cabinet. Mr Gandhi had visited Sarabjit's family in Delhi too yesterday, where he had hugged Dalbir Kaur and reportedly even wept.

There are thousands of people today in Bhikiwind, the ancestral village of Sarabjit Singh, the Indian prisoner who died in a Pakistan hospital yesterday after being brutally attacked in a Lahore jail last week. He has been declared a martyr in Punjab. A three-day state mourning has been announced and a 21-gun salute honoured him before the funeral pyre was lit.

This morning a bitter Dalbir Kaur said the Indian government had not done enough to save her brother. "The government acted too late," she said and added that "concentrated efforts should be made to bring back other Indian prisoners in Pakistan."

Pakistan had rejected three appeals from India in the last week that Mr Singh be treated at home.
There is much anger in India over Sarabjit's death. The government has called it "extremely inhuman and barbaric". The BJP said it was cold-blooded murder.
In a Jammu jail, a Pakistani prisoner was reportedly hit on the head with a hammer by another inmate and is in a coma. Pakistan has alleged that he was attacked in retaliation to the attack on Sarabjit Singh by six other prisoners on Friday last. Mr Singh was taken to hospital with severe head injuries and he died on Thursday morning.

Promoted
Listen to the latest songs, only on JioSaavn.com
Worried about retaliatory attacks in India, the Home Ministry had last evening asked all states to increase the security for nearly 200 Pakistani prisoners who are in jail across the country.
Sarabjit Singh was given the death sentence in 1991 for bombings in Pakistan's Lahore and Faisalabad in which 14 people were killed. His family has, however, said that he was a farmer who strayed one night across the border 23 years ago, when drunk.