Union Human Resource Development Minister Ramesh Pokhriyal Nishank asserted that sanskrit is the most usable, the most scientific language and decipherable by computer. 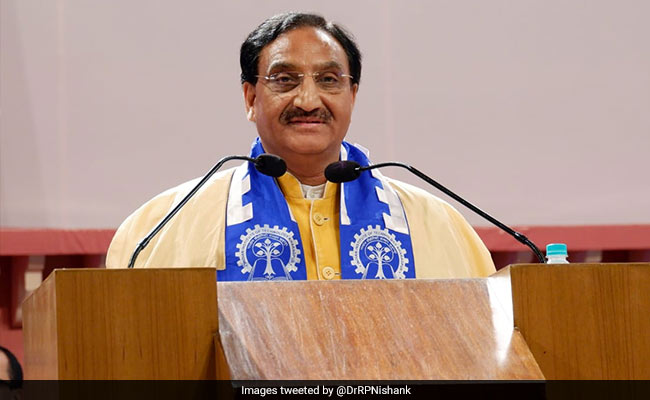 Union Human Resource Development Minister Ramesh Pokhriyal Nishank on Tuesday praised sanskrit as a scientific language and claimed it to be the "first language of the world."

Mr Nishank, who was addressing the 65th Convocation of IIT Kharagpur, said India had been the world leader from knowledge to science for ages.

He said yoga and ayurveda, which had been introduced by India ages back, have "science behind it."

The minister asserted that sanskrit is the most usable, the most scientific language and decipherable by computer.

"Sanskrit is the first language of the world," he said. Talking about the country's rich history and culture, the minister described river Ganga as "our mother and life," and said India's conscience is deeply ingrained with science and knowledge.

He said Himalaya "which is like Nilkantha" (apparently referring to Lord Shiva who had gulped the poison to save the world after the churning of sea in search of amrit, nector), having absorbed all poison, is saving the environment by "guarding against pollution of developed countries".

Stating India is now reaching the top of the world in terms of economic growth, the minister said "in economy India is the fast moving country leaving behind China."

"In terms of FDI, India has left behind USA as number one," he said.

The HRD minister said to improve the ranking of degree colleges and universitiies, which have not been granted higher ranking, the government will take steps to improve the standard of education, including training 42 lakh teachers, the number being the biggest in the world.

"By improving the ranking, 3.27 crore students will be benefitted," he said.

He said the new education policy is being introduced after 33 years, to benefit over two lakh students all over the country.

The policy will bring change in curriculum with focus on market-driven education.

The minister said as part of "operation digital board", 12 lakh smart classes are being launched.

He said as part of curriculum, students will be asked to plant a tree on his/her birthday to encourage plantation of trees.

Cautioning against the 'brain-drain' trend, the minister said he had been to Ukraine recently.

"As I enquired how many Indians are there, I was told there are 15,000 students in medical college there while in the faculty there are 80 per cent Indians.

"So the students and most of the faculty are both Indians. We have to change that by not not only giving speeches but by resolve. Our Prime Minister Narendra Modi always says so," he said.