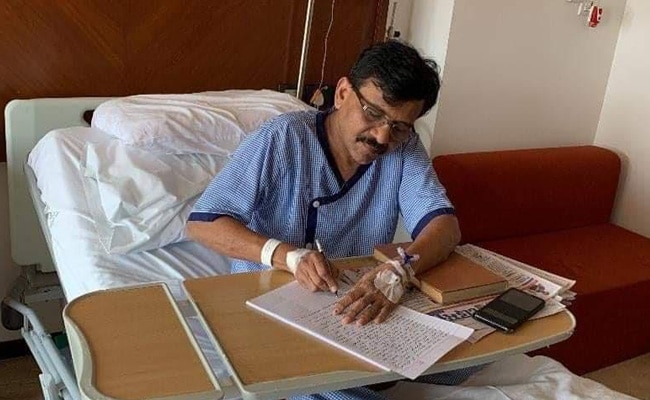 Sanjay Raut was admitted to Lilavati Hospital in Mumbai.

"Lahron se dar kar nauka paar nahi hoti, koshish karne walon ki haar nahi hoti (If you have fear of waves, you won't be able to cross the ocean.. those who try, never lose," he tweeted in Hindi, adding, "hum honge kamyab.. zaroor honge (we will succeed, for sure)".

BJP leaders Harshvardhan Patil and Ashish Shelar also met Mr Raut at hospital and said it was a courtesy visit with "no political angle". "Doctors have advised Mr Raut to speak less. I met him out of courtesy. It is Maharashtra's culture, we meet unwell people irrespective of political differences."  "There was no political angle to this meet. A senior BJP office-bearer is also admitted in the same hospital, I also met him," he added.

Two blockages were detected in one of the arteries, the Sena leader's brother said. "Later in the night, an angioplasty was performed and he is recovering and stable now," his brother Sunil Raut was quoted as saying by news agency IANS.

The angioplasty was carried out by Dr Ajit Menon, who had earlier treated Sena founder Bal Thackeray. Mr Raut is likely to be discharged in a day or two, IANS reported.

On Monday, Sena had set the stage for talks with the NCP and Congress as it pulled out its lone minister in Prime Minister Narendra Modi's government, Arvind Sawant, signaling its break-up with the BJP-led National Democratic Alliance (NDA).

Yet hours of deliberation did not yield a result that Sena expected. The Congress did not rule out support to the Sena but said in a noncommittal statement: "The Congress president has spoken to Sharad Pawar. The party will have further discussions with NCP."

Now Sharad Pawar's NCP, the third largest party, had been given a deadline till 8:30 pm today to stake claim. However, the Union Cabinet has now recommended President's Rule in the state.

The Shiv Sena has moved the Supreme Court against Maharashtra Governor's decision to reject its plea seeking three days time to get letters of support from the NCP and the Congress.

Earlier on Sunday, Sena ally, the BJP had refused Governor's invitation as its decades-old alliance partner stuck to its demand of "50:50" deal.

Since the state election results were announced on October 24, Mr Raut, executive editor of the Sena's mouthpiece "Saamana", has been the face of his party's repeated demand for chief ministership for 2.5 years and 50:50 split in portfolios.