The child, Fatehvir, fell into the unused borewell in a field when he was playing near his house around 4 pm on Thursday. 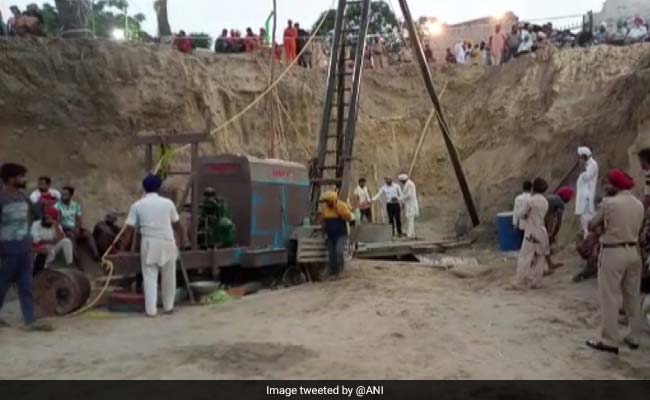 The rescue operation has been going on for the last 78 hours.

Rescuers were facing some technical issues on Sunday as they as are "quite close" to reaching where a two-year-old boy has been stuck in a 150-foot-deep borewell in Punjab's Sangrur district for past three days, officials said.

The child, Fatehvir, fell into the unused borewell in a field when he was playing near his house around 4 pm on Thursday. The seven-inch-wide borewell was covered with a cloth and the boy accidentally stepped on it. His mother tried to rescue him, but failed, officials said.

The rescue operation has been going on for the last 78 hours. "We are quite close to reaching the child. We were hoping to complete the operation during the day, but we are facing some technical issues and hopefully these will be overcome," district Deputy Commissioner Ganshyam Thori said in the evening.

No food could be provided to the child, who has been unconscious after he fell into the borewell, Mr Thori said, adding that oxygen was being supplied to him.

On Saturday morning, officials, who were monitoring the boy's condition through camera, had said some movements of the child were noticed.

Mr Thori, who is supervising the rescue operation, described it as the "rarest of the rare", and said it was quite challenging as there were a lot of technicalities involved.

The National Disaster Response Force (NDRF) has also deputed an officer who specialises in operations to rescue children stuck in borewells, the official said earlier in the day.

To retrieve Fatehvir, a parallel borewell has been dug by installing reinforced cement concrete (RCC) pipes of nearly 36 inches in diameter. However, as rescuers were close to reaching the child, they were facing some technical issues. In the early hours of Sunday, the rescuers also faced some issues in the parallel borewell.

"Nowhere in the world has such an operation been carried out where a child is stuck at such a depth in a borewell. Even recently in the Hisar incident, the depth of the borewell was much less," Mr Thori said.

In March, an 18-month-old boy was rescued from a borewell in Haryana's Hisar district, two days after he had fallen into it.

Punjab cabinet minister Vijay Inder Singla was camping at the rescue site. State minister Sukhjinder Singh Randhawa said the government must frame a law and charge the borewell owners for murder if any child falls into a borewell, which has been left open and not covered properly.

Giving details of the operation, Mr Thori said the NDRF personnel had managed to clamp both the hands of the child in the early phase of the rescue operation on Thursday, but given the peculiar position where he is stuck, they could not risk pulling him as he could be harmed.

Twenty-six members of the NDRF are engaged in the rescue operation.

The incident has again brought to fore the dangers posed by uncovered borewells, which have turned into death traps for children.

In 2006, a massive operation was launched to rescue five-year-old child, Prince, who had fallen into a borewell in a village in Kurukshetra. He was pulled out safely nearly 48 hours later.