This means the former minister, who has already been disqualified as MLA after his conviction, will not be able to vote in the December 5 by-election to his traditional seat of Rampur Sadar (urban). 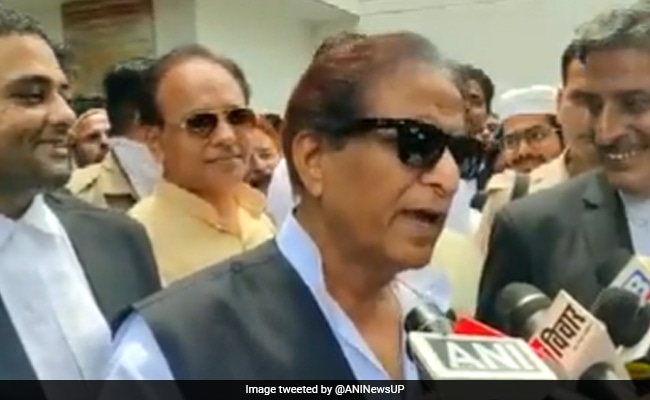 Samajwadi Party leader Azam Khan's name has been removed from the electoral roll in Uttar Pradesh's Rampur, officials said on Thursday, weeks after he was convicted in a 2019 hate speech case.

This means the former minister, who has already been disqualified as MLA after his conviction, will not be able to vote in the December 5 by-election to his traditional seat of Rampur Sadar (urban).

The decision to remove his name from the list was taken by the Rampur Electoral Registration officer (ERO) on a complaint by BJP bypoll candidate Akash Saxena, who cited various provisions of law to seek the deletion of his name.

In its decision, the ERO said, "Along with the application submitted by the applicant (Saxena), copies of the judgment/order of the court, and after considering the relevant provisions of the Representation of the People Act, 1950 and the Representation of the People Act, 1951, the name of Mohammad Azam Khan is suitable for Striking off. "Accordingly, the name of Khan should be immediately deleted from the serial number-333 of Vidhan sabha 37-Rampur, " it said.

Mr Khan, who was Rampur MLA, was disqualified following his conviction last month in the hate speech case.

The senior SP leader faces a tough challenge to ensure the victory of his protege Asim Raza from the Sadar seat in the by-election.

Mr Khan accompanied Raza during filing of nomination earlier in the day day for the by-poll.

A Rampur Special court had last month sentenced him to three years of imprisonment in 2019 hate speech case.

Following this, the assembly secretariat had declared the seat vacant.

The Election Commission is conducting by-election there along with on some other constituencies including the Mainpuri Lok Sabha seat which was represented by the late SP founder Mulayam Singh Yadav and Khatauli in Muzaffarnagar which fell vacant following the disqualification of BJP MLA Vikram Singh Saini after his conviction in 2013 Muzaffarnagar riots case.

The senior SP leader had won the Rampur Sadar seat in the recent state polls for tenth time.

Mr Saxena, the complaint in the instant matter and also in dozens of other cases against Mr Khan, is the BJP nominee from the Rampur Sadar seat.