Salman Rushdie's Tweet After Being Mistaken For Salman Khurshid

When Salman Khurshid tweeted a photograph of Rajiv Gandhi and Rahul Gandhi, a user inadvertently dragged Salman Rushdie into the discussion 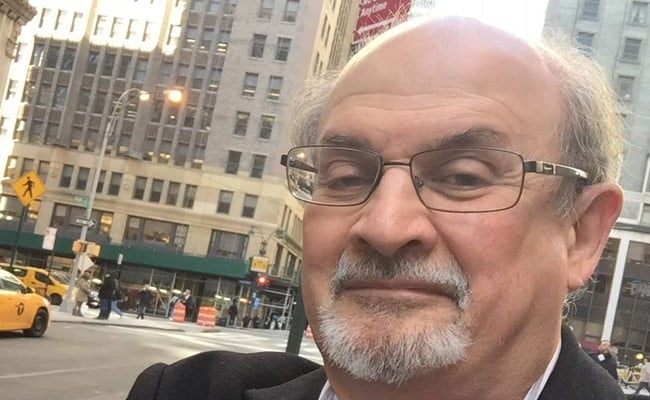 Author Salman Rushdie was tagged by a Twitter user over something a namesake posted on Friday which led to an exchange of humorous tweets on the microblogging site. It started with senior Congress leader Salman Khurshid describing former Prime Minister Rajiv Gandhi and his son Rahul Gandhi as the "once" and "future king" of democracy. Unexpectedly, a Twitter user tagged Mr Rushdie in her response by mistake. Enjoying the unsolicited attention, the author told the user that he was not who she thought. Instead, he humorously identified himself as Bollywood actor Salman Khan.

Mr Khurshid, the former external affairs minister, had tweeted the photograph of Rajiv Gandhi on May 21 - the 30th death anniversary of the former PM - and another of Rahul Gandhi on the side.

The once and future king of democracy. pic.twitter.com/UwpCabdgwm

The tweet generated a debate among the supporters and critics of Rahul Gandhi. But one user, who criticised the Congress leader, tagged Mr Rushdie and the attention soon shifted to her mistake.

Expect a chamcha like @SalmanRushdie to use the word "King" to define "democracy".????‍♀‍

When Mr Rushdie noticed that his name was mentioned in a tweet which he had no connection with, he corrected the user, and did so with wit and sarcasm.

I think you have the wrong Salman. I'm @BeingSalmanKhan. https://t.co/J9DSAI41P1

Mr Rushdie's response triggered a stream of jokes on the micro-blogging site.

I think you have the wrong Salman. I'm @BeingSalmanKhan. https://t.co/J9DSAI41P1

Haha. Flex your muscles yo!

Imagine being world famous and hunted by Iran and then being mistaken for a wrong person????????????

Now after all this I guess what @odysseuslahori would have been thinking....https://t.co/8qIkl84BzD

Hahaha! This is just precious!

Courtesy his tweet, Mr Rushdie has overtaken Mr Khurshid in terms of ‘likes' on Twitter. While Mr Rushdie's response has got more than 10,000 ‘likes', Mr Khurshid's is still under 7,000. On The latter's tweet though, a debate was brewing over his use of the word “king” to refer to the two Gandhis. As Mr Khurshid's supporters rallied behind him, those who disagreed with him also built their case.

Democracy has no king...leader is elected. This is the problem with congress...Gandhi bhakti

Now, it would be interesting to see if Mr Salman Khan, too, joins the banter on Twitter.