Jodhpur: Movie star Salman Khan was given the benefit of doubt today by a court in Rajasthan's Jodhpur, which held him "not guilty" of keeping an unlicensed weapon and using it during an alleged deer hunt in 1998. He had been charged under the Arms Act as part of several cases linked to the poaching of blackbuck.

Dressed in a crisp white shirt, the 51-year-old came to the Jodhpur court with his sister Alvira. Within minutes, he was let off. The judge said the evidence against him was not strong enough. 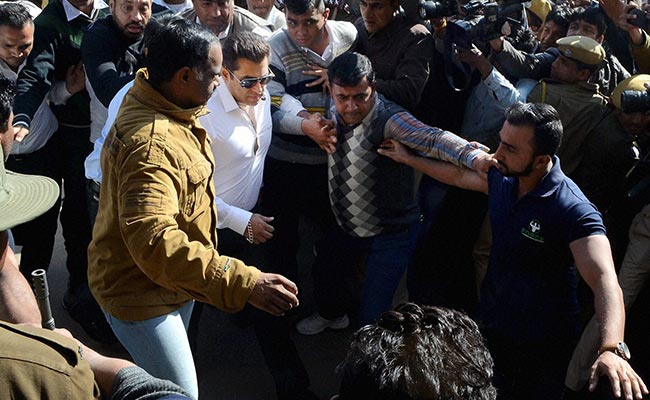 Minutes after he was acquitted, Salman Khan tweeted, "Thank you for all the support and good wishes" (PTI photo)

Salman Khan's lawyer had argued that the actor only had air guns and there was no evidence that he had used firearms. An eyewitness for the prosecution never showed up. The judge also said two post mortem reports on the deer listed different causes of death - dog-bite and gunshot wound.

Minutes after the acquittal, the actor tweeted:

Thank you for all the support and good wishes

"It's a huge relief for us, we had full faith in judiciary," said the actor's father, Salim Khan.

Over the years, Salman Khan has faced multiple cases for allegedly killing two endangered chinkaras and two blackbucks during a location shoot in 1998 for the film "Hum Saath Saath Hain", co-starring Saif Ali Khan, Sonali Bendre, Neelam and Tabu.
In 2007, he spent a week in jail in Jodhpur before being granted bail.

Salman Khan had earlier been cleared by the Rajasthan High Court in two cases related to the killing of the chinkara deer. That decision, which overturned two jail terms handed to the actor by a lower court, has been challenged by Rajasthan before the Supreme Court.

Another case involving the alleged poaching of blackbuck is still being heard. The four other actors have been asked to appear in court on January 25 to record their statements in the case.

Promoted
Listen to the latest songs, only on JioSaavn.com
Last year, the actor's five-year prison sentence in a hit-and-run case was suspended by the Bombay High Court. He had been convicted for killing a homeless man with his SUV on a night out drinking in September 2002.

Salman Khan is one of the most popular and successful stars in the Hindi film industry, with his movies mostly crossing the "100-crore" mark.