"I will be taking part in the Golden Globe Race 2022 on the Bayanat. It is a big thing for me and here is why," the sailor said in a Facebook post recalling his experience after his boat was dismasted and destroyed in a storm in the southern Indian Ocean while participating in 2018. 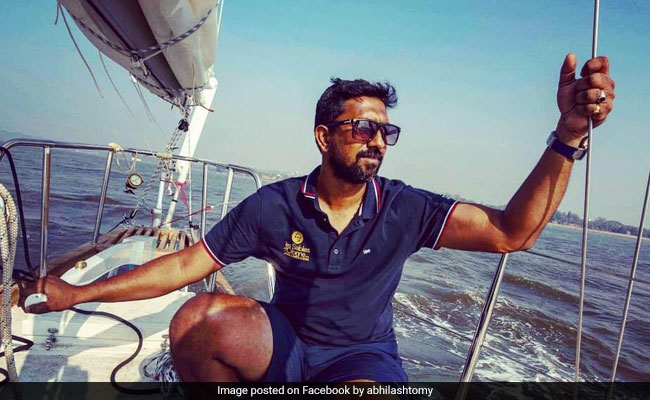 Celebrity sailor Commander Abhilash Tomy, who was hailed for his bravery in surviving after being severely injured during the arduous Golden Globe circumnavigation race in 2018, has announced that he will participate in the same solo sailboat race around the world this year.

At the Dubai Expo 2020 on Tuesday, Commander Tomy announced his official entry in the Golden Globe Race 2022 to be sponsored by Bayanat.

"I will be taking part in the Golden Globe Race 2022 on the Bayanat. It is a big thing for me and here is why," the sailor said in a Facebook post recalling his experience after his boat was dismasted and destroyed in a storm in the southern Indian Ocean while participating in 2018.

The organisers Golden Globe Race said, "Happy to announce the return of Abhilash Tomy into the #GGR2022 who has some unfinished business!" He had suffered a huge fall which left him with multiple spine fractures and with functionless legs in the incident that occurred on September 21, 2018 -- 82 days after the beginning of the race.

"But I did learn to walk, and then got into a cockpit and got back to flying, and sailing! 3 and a half years later, I am heading back into the same race that almost got me killed. Wish me luck !," Commander Tomy said announcing his decision to participate in the race.

The naval officer was rescued from the Indian Ocean in a multi-nation operation after suffering a severe injury when the main mast of his sailing vessel 'Thuriya' was ripped off in the storm.

His boat was damaged in the storm about 1,900 nautical miles from Perth, Australia. Badly injured, Commander Tomy had to wait 72 hours at the sea for help to arrive.

"The remoteness? Couldn't have been worse. The Antarctic was the nearest continent. We were exactly between Australia and South Africa, and south of India. The international SAR organisation kicked in, with four nations joining the rescue effort," Commander Tomy recalled.

Australian P8 and Indian P8i aircraft were dispatched to fly overhead. INS Satpura set sail from India and HMAS Ballarat was despatched by the Australian Navy.

French fisheries patrol vessel "Osiris" was the first to reach. "It took them three and a half days", he said.

"I was shifted to Ile Amsterdam, an island in the French sub-Antarctic Territories @TAAFofficiel @AuTaaf where I was given primary medical care. On the 6th day after the accident I even went for a walk with crutches because I had no idea about the fractures," he said in the post.

INS Satpura arrived on Day 7 and he was transferred to the Indian naval ship on a helicopter.

"We arrived in India on the 16th day. An MRI revealed the fractures in the spine. Two days later, I was operated upon. Titanium rods were inserted in my spine and five vertebrae were fused into one. My legs were so badly off that I had to learn to walk again," Commander Tomy said narrating his ordeal.

A year after recovering from the injuries, Commander Tomy had started sailing again. He won a small championship in Goa in 2019.

Within one year of breaking his spine, he did 50 kilometres of kayaking. That was to mark the first anniversary of his accident.

Commander Tomy had retired from Indian Naval service in January last year. Navy sources had said he applied for premature retirement from service.