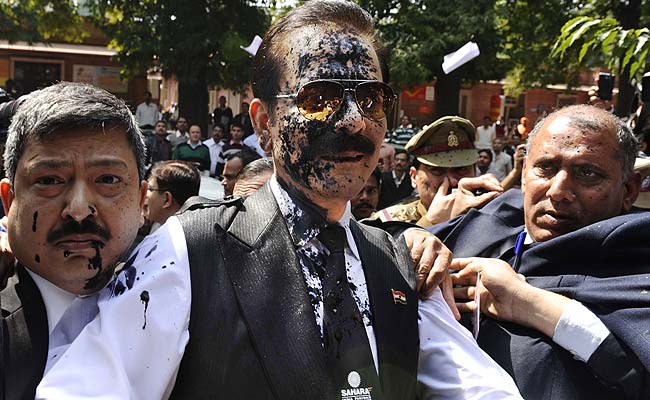 On his way into court, Subrata Roy was sprayed with ink by a lawyer.

Subrata Roy, the chief of the Sahara conglomerate, was sent to Tihar Jail today by the Supreme Court, after he failed to convince judges that he is is serious about refunding nearly 20,000 crores to investors in bond schemes that have been declared illegal. (What may have led to the Sahara chief's arrest)

The court said the 65-year-old will remain in jail till the next hearing on March 11, though  he can ask for an earlier hearing if he is ready with "a concrete proposal."

"This is the best award the country could have given me," Mr Roy acerbically told reporters as he left court.

To the judges, Mr Roy, often photographed with Bollywood stars, made filmy pitches that fell flat. "Ours is a beautiful human story. If you know, it you will love us," the Sahara chief said.  "We will love it if you obey our orders and make the payments, " the judges retorted, adding that they want a clear plan for how Mr Roy aims to refund nearly 20,000 crores to investors in small towns and villages. ('Obey orders and we'll love your story': Supreme Court to Subrata Roy)

On his way into court, Mr Roy was sprayed with ink by a lawyer who alleged, "He robs the poor."  (Watch)

The Sahara empire extends from a stake in a Formula 1 racing team to a sprawling Indian luxury township, the iconic New York Plaza Hotel and Grosvenor Hotel in London.
In 2012, the group was ordered by court to repay nearly 24,000 crores to three million investors, many of them rural savers.

Sahara says it has repaid most of the money, and its remaining liability is less than  the 5,000 crores it has deposited with The Securities and Exchange Board of India (SEBI). But  the company has been cagey about revealing how it funded the repayments it has allegedly made, and SEBI says the list  of  recipients lacks credibility.

Today, the court rejected Sahara's offer of a bank guarantee for Rs 22,000 crore, while it sells property assets that it claims are worth nearly that much, an estimate rejected by SEBI as vastly exaggerated.

Promoted
Listen to the latest songs, only on JioSaavn.com
Sahara's financial troubles began in 2008 when it shut operations as India's biggest non-bank deposit-taking firm on orders of the court, which was worried about whether its schemes were sound.