Sachin Pilot sounded critical of his government a day after the alleged custodial death of a Dalit in the Barmer district and thrashing of two other Dalits youths in Nagaur district. 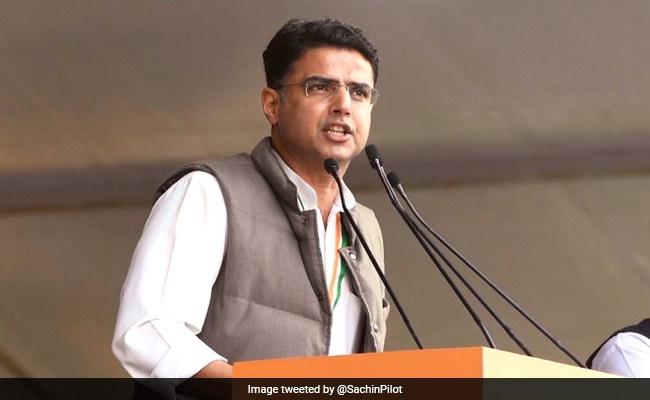 Rajasthan Congress president Sachin Pilot on Friday again sounded critical of his own party's government, this time over recent crimes against Dalits and the failure of the state home ministry, a portfolio held by Chief Minister Ashok Gehlot, in controlling them.

Mr Pilot, who is also the state's deputy chief minister, sounded critical of his government a day after the alleged custodial death of a Dalit in the neighbouring Barmer district and thrashing of two other Dalits youths in a motorcycle show room in Nagaur district on February 16.

"The way the spurt in crimes against Dalits have been reported, it was our duty to control these crimes and instill confidence in Dalits that it would not happen again," said Mr Pilot, while voicing his party's concern over atrocities against Dalits.

Congress leader Rahul Gandhi too had termed the Nagaur incident, in which two Dalit youths were brutalised on camera, as "horrific and sickening" and had asked his party government in the state to take immediate action to bring the perpetrators to book.

"We have taken the crime and atrocities against Dalits seriously and would act in these matters. If there was any shortcomings in the administration and the Home Department, they would be addressed," said Mr Pilot.

Mr Pilot made the remarks while talking to reporters in Jodhpur, where he had visited to attend the wedding ceremony of party leader Karan Singh Uchiyarda.

Mr Pilot had flown to Jodhpur after submitting a report on recent incidents of atrocities against Dalits in the state to party chief Sonia Gandhi.

"I have given the report to the party president and government too has been doing its duty. But apart from the transfer (of officials) or other actions, we need to give a political message that our government would have zero-tolerance against such anti-Dalit incidents," said Mr Pilot.

The deputy chief ministry also emphasised upon his government's onus to fix officials' responsibility over the failure in preventing the crime and conveying the political message of the party's zero-tolerance against anti-Dalit incidents.

"For this, we would have to further strengthen the Home Department," said the deputy chief minister, who has often criticised his own party government in the past on various issues, including the spate of death of infants in a Kota hospital towards the year-end last year.

Referring to the corruption in the system, specially in the context of bajari mining, Mr Pilot said "harsh action, irrespective of the status, stature and influence of the corrupt, will have to be taken to root out corruption".

Talking about the violence in Delhi, he said it is a matter of investigation as to what were the reasons of riots and who were responsible.

"There were lacunae on the part of both the central and the Delhi governments. Whosoever, is responsible, would have to be punished," he said.