Travancore Devaswom Board President N Vasu on Monday said there was an increase of over 50 per cent in the revenue when compared to last year and the pilgrimage season this year has been going well. 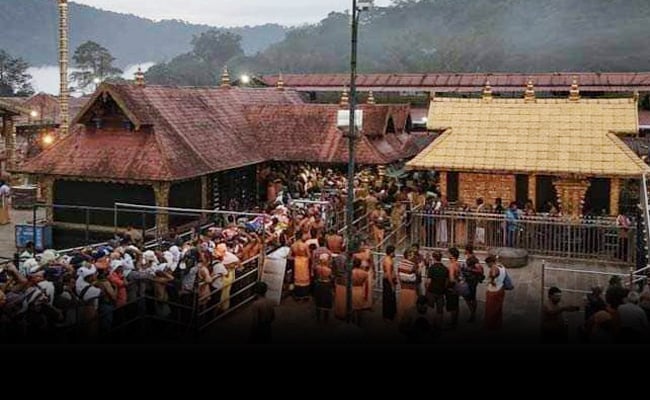 Sabarimala: Over 70,000 devotees have offered prayers at the hill shrine (File Photo)

The Lord Ayyappa temple in Sabarimala received over Rs 3.30 crore as revenue on the first day when it opened on Saturday as compared to the Rs 2.04 crore last season which was marred by protests by a section of devotees and right-wing outfits over the women's entry issue.

Over 70,000 devotees have offered prayers at the hill shrine since the temple opened on November 16 evening for the two-month long Mandala-Makkarvilakku puja.

Travancore Devaswom Board President N Vasu on Monday said there was an increase of over 50 per cent in the revenue when compared to last year and the pilgrimage season this year has been going well.

"There is a huge increase in the number of devotees this year. We got Rs 3.32 crore revenue on the first day compared to Rs 2.04 crore last year. The devotees who visited this year are satisfied with the facilities we have arranged," Mr Vasu told the media.

Unlike last year when the temple complex witnessed violent protests after the state government decided to implement the September 28, 2018 verdict of the top court allowing women of all ages to enter the shrine, this year the devotees expressed happiness as there were no restrictions. Mr Vasu also said ''Annadanam'' for around 40,000 people have been arranged.

Annadanam is offering of food for the devotees.

"We have stored enough drinking water to cater to the needs of the devotees. We aim to make Sabarimala plastic free pilgrim centre.

"We have started a campaign to avoid plastic from the irumudikettu (sacred bundle containing offerings to Ayyappa)," Mr Vasu said.

Though the top court did not stay its September 2018 order allowing entry of women into the Ayyappa temple, the LDF government in Kerala this time said the shrine was not a ground for activism and made it clear it would not encourage women who want to visit the temple for publicity.

A five-judge Constitution bench of the Supreme Court had on November 14 in a 3:2 verdict decided to refer to a larger bench to re-examine religious issues including those arising out of its 2018 verdict lifting a centuries-old ban on women of menstruating age visiting the shrine.

The TDB, which administers the shrine and the temple itself, suffered huge loss last season due to the protests by the right-wing outfits.

The shrine and adjacent areas, including Pamba and Nilackal, were on high-alert last year due to the Supreme Court order on women's entry.