With the sudden change in leadership, the editorial in the Sena mouthpiece Saamana claimed that the "balloon" of Gujarat's model of development, governance, and democracy has now been burst. 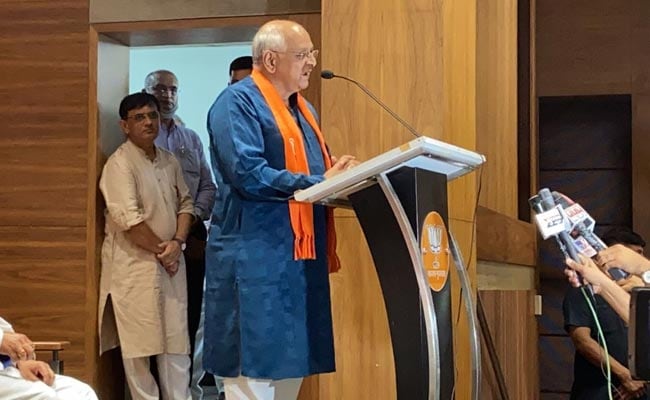 The Shiv Sena today said the sudden change of guard in Gujarat, where first-time BJP MLA Bhupendra Patel has been appointed as the new chief minister, reflected the style of functioning generally associated with the Congress and claimed that the move shows that the "balloon" of Gujarat's development model has burst.

An editorial in Sena mouthpiece "Saamana" said the people of Gujarat were extremely angry over the "collapse" of the healthcare system during the second Covid wave when Vijay Rupani was the chief minister, and the BJP also realised that the influential Patidar community, to which Bhupendra Patel belongs, is miffed with the party, leading to the change at the top.

"The same thing takes place in the Congress and we have to call it democracy," quipped the Sena, a former ally of the BJP which now shares power with the Congress and the Nationalist Congress Party (NCP) in Maharashtra.

With the sudden change in leadership, the editorial claimed that the "balloon" of Gujarat's model of development, governance, and democracy has now been burst.

"Bhupendra Patel was not even made a minister in the last four years, but he was directly made the chief minister. If Gujarat was truly on the path of progress, then why did the BJP change its chief minister overnight?" the Marathi daily sought to know.

Amid the cacophony of "vikas" (development), if the leadership is suddenly changed, people raise doubts, it said.

"Is this the Gujarat model where Prime Minister Narendra Modi will actually have to call the shots by keeping Bhupendra Patel at the forefront ahead of the state polls (due in December next year)?" the editorial asked.

Mr Patel is a staunch supporter of former Gujarat chief minister Anandiben Patel while Vijay Rupani had the backing of Union Home Minister Amit Shah, and this will make the coming days "chaotic as well as interesting", the publication said.

"Replacing Vijay Rupani with Bhupendra Patel was a facile act. The BJP is convinced that it will face a backlash due to unemployment, closure of major factories, including carmaker Ford's plant near Ahmedabad," it said.

Gujarat's healthcare system "collapsed" during the second wave of the pandemic and people are extremely angry over it, the editorial claimed, adding the closure of the Ford plant has led to around 40,000 people losing their livelihood.

"The Gujarat state government was staring helplessly at the dance of death during the second wave. Pyres were lit in every village and people are anguished," the Sena publication said.

"People who are not in the limelight have been given key positions (by the BJP), like the selection of Devendra Fadnavis as Maharashtra chief minister after the 2014 Assembly polls," the editorial said.