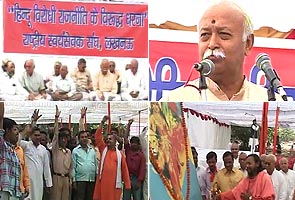 New Delhi: RSS chief Mohan Bhagwat today alleged that there was a well-planned conspiracy to tag the saffron outfit as a terrorist organisation and said it will come out clean.

"Dragging Sangh into an unnecessary controversy is not a new phenomenon and this time also it is being made a scapegoat by those who are feeling tizzy of losing their place in Delhi," Bhagwat said while addressing a dharna.

"But this time Sangh has decided to tell the people what the reality is. We will fight it in the court, publicise our view and will reach out to the people and tell them the reality," he said while referring to allegations against RSS functionary Indresh Kumar, who is being associated with Ajmer blast.

Even after this, if those conspiring against the organisation continue with their nefarious attempts, the Sangh will teach them a lesson, Bhagwat said.

The RSS chief said that staging dharna was neither the nature nor work culture of the organisation.

"For the first time in the history of the organization a Sarsangh Chalak has not only attended a dharna but also addressed the meeting as a conspiracy was being hatched to tag terrorism with the RSS," he said.

In an apparent reference on the alleged involvement of Indresh Kumar in the Ajmer blast, Bhagwat said, "This is a sheer lie. Those who are involved in blasts were either not the members of the Sangh or they were ousted from the organisation long back due to their violent nature."

He said that RSS and violence were antonym and non-violence is the base of the organisation which can never be changed.

"But taking advantage of the situation, some people started talking about Hindu terrorism, but after realizing that it will result in an outrage, they renamed it as saffron terrorism," he said.

"By calling names of some persons an effort is being made to prove that Sangh is terrorist outfit. People against whom allegations are being made have an open character. They are the people who serve the country and teach others how to become a good citizen," he said.

The RSS chief alleged that since 2003 attacks were being carried out on saints as a well-planned conspiracy to demoralise Hindus.

"First Kanchi Acharya was arrested and dirty allegations were levelled against him, then Swami Laxman, who was working for the welfare of tribals in Odisha was killed. Everyone knows about the conspirators, but they are still roaming free," he alleged.

"This was done by those who knew that opinion of people will change due to work of these saints. Now dragging Sangh's name is a part of that chain," he said.

Bhagwat said that the RSS was cooperating even in the bomb blasts cases as it was alleged that some persons were under suspicion.

"Though no chargesheet has been filed yet, some politicians have started making baseless statement. A person made such a hilarious statement which is not even worth mentioning," he said.

The RSS chief said that no chargesheet was filed against Indresh so far and he was not even named among accused.

"Even probe agencies have said that a lot is yet to be inquired. Everyone knows that his name is being dragged unnecessarily," he said.

"At time when baseless things are being said against Indresh, we realised that keeping mum was not right and reality should come before the country," he said.

Bhagwat said that the problem was not for the RSS only but the entire Hindu society as an effort was being made to demoralise them by spreading canard.

"Respecting the Constitutional traditions, we had been working silently so far, but this is the limit. Today danger looms large over peace, unity and integrity of the country and people should realise it," he said.

"Those who are indulging in such activities will not get benefited and truth will finally come out. RSS will face this test and will come out cleaner," he added.

Bhagwat said that this series of unnecessary harassment of RSS workers should be put to an end.
Comments
RSS protestsNationwide protestsAjmer Blast