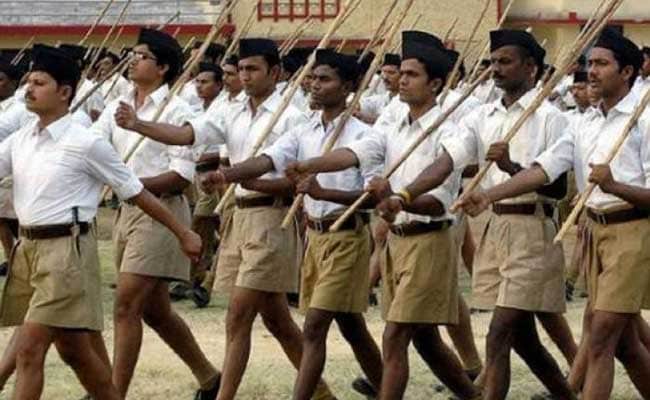 The move is part of efforts to make students aware about ''new trends'' in history.

The history of the Rashtriya Swayamsevak Sangh (RSS) and its role in ''nation-building'' have been included in the syllabus of a university based in Nagpur, where the Sangh has headquarters.

While the third section of the syllabus has details about the role of RSS in nation-building, the first section speaks about the establishment of the Congress party and the rise of Jawaharlal Nehru and the second section dwells on issues like the civil disobedience movement.

A source close to the development said the move is part of efforts to make students aware about ''new trends'' in history.

Satish Chafle, a member of the Board of Studies of the university, told news agency PTI on Tuesday that a chapter on the Sangh's role in nation-building has been introduced in the History of India (1885-1947) unit, which is part of the fourth semester for the second year of Bachelor of Arts (History) course.

The university syllabus had a chapter on "introduction to RSS" for the MA (History) course in 2003-2004.

"This year, we have introduced the contribution of the RSS in the nation building for the students of history so that they can know about new trends that take place in history. New trends like Marxism, new Marxism or new modernism have become a part of history as new trends," he said.

The induction of a chapter on the RSS has created a flutter. Maharashtra Congress spokesperson Sachin Sawant tweeted, "Where would Nagpur University find reference of RSS & Nation Building? It is most divisive force which collaborated with British, opposed freedom movement, didn't hoist Tricolor for 52 yrs calling it inauspicious, wanted Manusmriti in lieu of constitution, spreads Hatred."

Maharashtra's former chief minister Ashok Chavan said the RSS's "Opposition'' to the 1942 Quit India movement, the Constitution and National Flag should also feature in the syllabus.

"We demand that RSS's protest to Chale Jao andolan in 1942, Indian constitution and National Flag should also be told to students," he tweeted.

Founded by K B Hedgewar in 1925, the Sangh is considered the ideological parent of the erstwhile Jan Sangh and its successor BJP.