The JNU administration's decision to ask Ms Thapar to submit her CV for assessment for her continuation as professor emerita drew sharp criticism from various quarters. 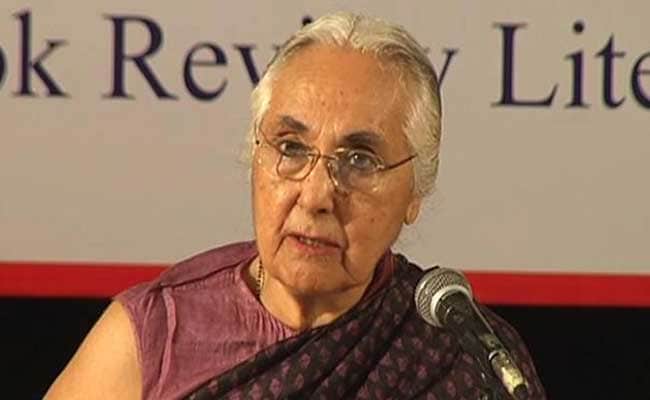 Former Jawaharlal Nehru University Vice-Chancellor Asis Datta, noted scientist R Rajaraman and historian Romila Thapar are among 12 emeritus professors whose curriculum vitae (CV) have been sought by the administration for a review of their work.

The 'professor emeritus' is an honorary position given to noted faculty members after their retirement. The emeritus professors are free to do academic work in the departments they are attached to and may supervise research scholars as core supervisors along with regular faculty members.

The JNU administration's decision to ask Ms Thapar to submit her CV for assessment for her continuation as professor emerita drew sharp criticism from various quarters.

However, the JNU registrar on Monday said that there are 11 others who have also been asked to submit their CVs.

The HRD Ministry on Monday clarified that there was no move to discontinue Professor Emeritus status to anyone by JNU and only standard procedures are being followed.

Mr Kumar said that even internationally, the professor emeritus position is not a permanent position.

"...the decision (to ask for their CVs) was taken by the university's Executive Council," he said.

Former JNU VC Datta is an eminent molecular biologist and educationist who was conferred the Padma Shri in 1999 and the Padma Bhushan, the country's third-highest civilian award, in 2008.
He is a recipient of the Shanti Swarup Bhatnagar Prize and the Priyadarshini Award.

Prof. Datta is an elected fellow of all three major Indian Science Academies as well as the "Third World Academy of Sciences". He was the eighth vice-chancellor of the university and the founder director of the National Institute of Plant Genome Research.

Professor Rajaraman did his PhD under Nobel laureate Hans Bethe, who had won Nobel Prize in Physics in 1967 for his work on the theory of stellar nucleosynthesis.

The Jawaharlal Nehru University Teachers' Association (JNUTA) had said on Sunday that the JNU administration's decision to ask 87-year-old Thapar to submit her CV was "politically motivated".

Soon after the JNUTA statement, the university said it was following its ordinance "in letter and spirit" in the appointment of professor emeritus at JNU.

"As per the ordinance, the university is required to write to all those who have attained the age of 75 years to know their availability and their willingness to continue their association with the university. Letters have been written only to those emeritus professors who fall in this category," it said.

It explained writing these letters are not for discontinuation but for an informed review by the Executive Council, the highest statutory body of the university, and it is consistent with the practices at other reputed universities such as Massachusetts Institute of Technology (MIT) and Princeton University.