Robert Vadra: The 4 Biggest Cases Against Him

Robert Vadra has denied any wrongdoing and said the cases are a political witch-hunt driven by the BJP to target the Congress leadership. 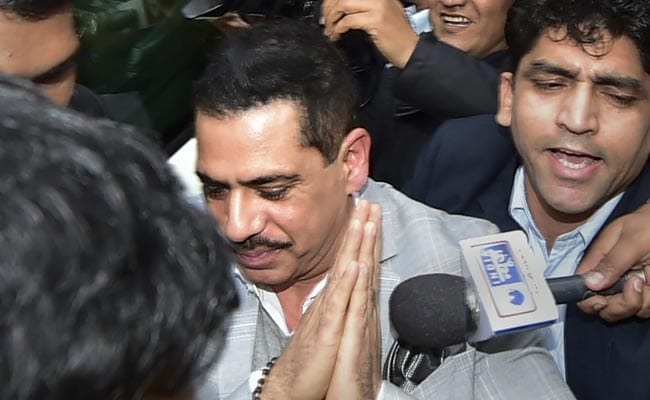 Robert Vadra was questioned by the Enforcement Directorate in a money laundering case.

Robert Vadra, the brother-in-law of Congress chief Rahul Gandhi, was questioned by the Enforcement Directorate or ED for the second day on Thursday in its money laundering case into the alleged possession of illegal foreign assets, days after he was directed by a city court to appear before the central probe agency. Mr Vadra has denied any wrongdoing and said the cases are a political witch-hunt driven by the BJP to target the Congress leadership.

Here is a look at the four most high-profile cases that Robert Vadra faces:

Late last year, the Enforcement Directorate had filed a case of money laundering in the purchase of a property worth 1.9 million pounds (over Rs 17.77 crore) located at 12, Bryanston Square, London, which allegedly belongs to Robert Vadra.

Apart from the Bryanston Square mansion, two more properties worth 4 million pounds (around Rs 37.42 crore) and 5 million pounds (more than Rs 46.77 crore), as well as 6 other flats are also suspected to be owned by Mr Vadra, according to Enforcement Directorate sources.

The total value of these properties is believed to be 12 million pounds and were bought between 2005 and 2010.

In September 2015, the ED registered a money laundering case alleging that Robert Vadra-owned Sky Light Hospitality had acquired land in Kolayat, Bikaner, which was meant for rehabilitation of poor villagers.

It was alleged that Mr Vadra bought 69.55 hectares of land at a cheaper rate and sold to Allegenery Finlease for Rs 5.15 crore through illegal transactions.

According to the Enforcement Directorate investigation, the buying company Allengenery had no real business and shareholders were also found to be fake.

According to the Enforcement Directorate, Robert Vadra and his associates received kickbacks in a petroleum deal signed in 2009 during the United Progressive Alliance (UPA) regime.

The BJP alleged that Mr Vadra benefited from the deal and used the money to buy posh properties worth several crores in London.

The ED claims that an initial probe has revealed that these London-based assets are part of kickbacks Mr Vadra received in a petroleum deal.

The money was allegedly transferred to Santech International, FZC, a company based in UAE and controlled. Santech then purchased the 12 Bryanstone Square mansion from Vortex, a private holding, and later Vortex shares were transferred to Skylight Investment, FZE, which is led by NRI businessman C Thampi.

An FIR was lodged against Robert Vadra and former Haryana Chief Minister Bhupinder Singh Hooda in September last year for alleged irregularities in land deals in Gurgaon. He faces allegations that his company Skylight Hospitality sold 3.5 acres of land in 2008 in Shikohpur village to DLF at a rate much higher than the prevailing rate.

In all the cases, Mr Vadra has denied any wrongdoing and accused investigating agencies of following orders from the ruling BJP.