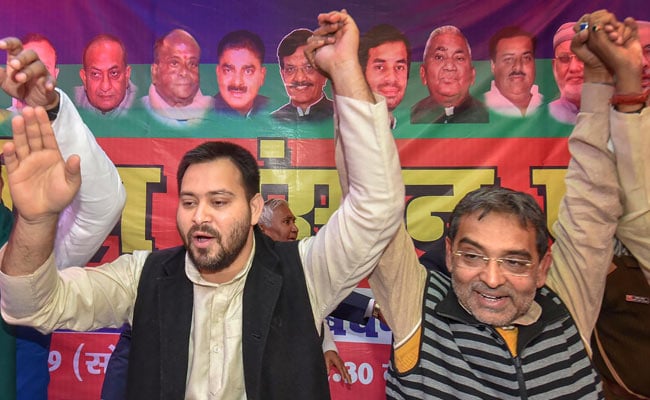 Upendra Kushwaha said that Nitish Kumar had made the remark earlier in the day.

After a meeting of Mahagathbandhan (grand alliance) leaders at Yadavs residence, the two leaders alleged that Mukesh Sahni, who floated his political outfit VIP two months ago and joined the Grand Alliance last month, was called sadak chhap (roadside) by the chief minister.

The meeting was attended, among others, by AICC in-charge for Bihar Shaktisinh Gohil, BPCC president Madan Mohan Jha, former Chief Minister and HAM president Jitan Ram Manjhi and Arjun Rai of the LJD founded by Sharad Yadav besides these two leaders.

The former Deputy CM and the ex-Union minister told reporters that Mr Kumar had made the remark at his Lok Samvad programme earlier in the day.

The chief minister, who also heads the JD(U) and is an alliance partner of the BJP, had mocked at the grand alliance saying it was picking up people from the roadside (sadak par se logon ko utha ke shaamil kar lete hain).

Mr Kushwaha and Mr Yadav alleged that the remark was aimed at Mr Sahni, a Bollywood set designer-turned-politician and was tantamount to insulting Nishad community.

Mr Kumar had first called me neech (lowly). Now he is calling our alliance partner ''sadak chhap''. He must apologize.

The RLSP chief was referring to a controversy that had erupted while he was in the NDA fold and Mr Kumar, while being asked by a journalist about the problems being faced in reaching a seat-sharing arrangement with Mr Kushwaha, had remarked bahas ka star neeche mat giraiye (do not lower the level of discourse).

Mr Kushwaha had alleged that this was tantamount to him being called lowly even as his party took out demonstrations in protest against the alleged "insult" of their leader at the hands of the chief minister.

Speaking on the occasion, Mr Yadav who is the leader of the opposition in the state assembly said, "by insulting our alliance partner, the chief minister has berated all of us. If he thinks we are roadside, he should remember that once he won power with our support".

Mr Yadav was referring to the 2015 Assembly polls, which Mr Kumar had fought in alliance with the RJD and the Congress.

Asked about the agenda of the grand alliance meeting that took place at his residence, the RJD heir apparent said the only agenda was how to win 40 of 40 seats. All grand alliance partners had a feast of rice and fish hosted by Mr Sahni earlier in the day.

Mr Kushwaha said there are no hiccups in arriving at a seat-sharing formula. But we have made it clear before that finalization will take place only after the inauspicious month of Kharmas ends on January 14.

Asked about absence of Left Front with which the grand alliance is planning to reach an electoral understanding, Mr Yadav quipped this is not the last meeting. After Nitish Kumar turned his back on us, only RJD and Congress were left behind. Then came Jitan Ram Manjhi, followed by others like Sharad Yadav, Kushwaha and Mukesh Sahni.