The Archaeological Survey of India (ASI) has banned namaz at the mosque inside Taj Mahal on all days, except for Fridays when it's closed for public 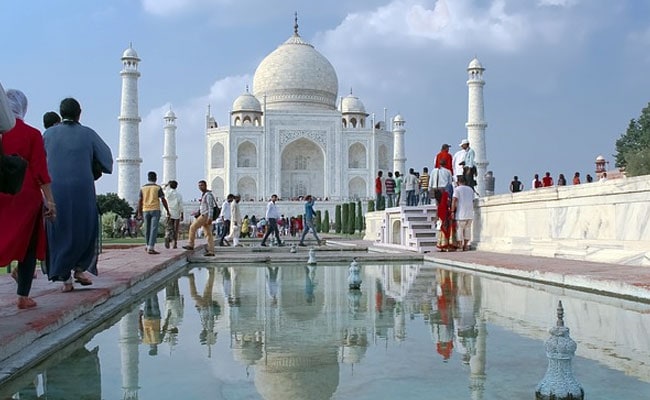 The activists performed aarti and "purified" the Taj Mahal with Ganga water.

A group of women, part of a right-wing organisation, performed "aarti" and sprinkled Gangajal (holy water) around the Taj Mahal on Saturday to protest the offering of prayers by Muslims on a weekday, reported news agency IANS.

The Archaeological Survey of India (ASI) has banned namaz at the mosque inside the Taj Mahal on all days, except for Fridays when it's closed for public. A notification came up on the gate of the 17th century monument last week.

After namaz was reportedly offered on Wednesday, several Hindu organisations threatened to perform puja inside the Taj Mahal. A few activists of the Rashtriya Bajrang Dal's (RBD) women wing criticised the authorities for failing to stop those offering namaz.

They performed aarti, "purified" the monument with Ganga water and threatened to repeat the ritual if "others" kept flouting the rules.

Meena Diwakar, the district president of RBD's women wing, told news agency ANI, "The authorities need to stop them first, and then they can stop us."

"We performed 'puja' at our Tejo Mahal, sprinkled Gangajal to purify it. Some people had made it impure by offering 'namaz'. They have Fridays for that purpose. That is why we performed aarti," she said.

The authorities had warned them against the puja, but the activists asked "why can't we take puja material inside when others can offer namaz there".

"We went there in a peaceful manner. If the authorities think we have done something wrong, we are ready to face action," Ms Diwakar said.

The RBD's Agra unit president Govind Parashar has demanded a thorough investigation into the security lapses and said he got to know about the puja from media reports.

But he also added that such a situation would not have come up if the Central Industrial Security Force (CISF), which is responsible for the Taj Mahal's security, had stopped them and action was taken against those flouting the ASI directive.

The original order of the Supreme Court allows local Muslims to offer prayers in the afternoon only on Fridays.

Muslim clerics say the ban violates their fundamental rights and want to be allowed to go inside for prayers every day.

Muslim cleric Mufti Mukarram said, "The ASI's decision is wrong and unjustified. People have been peacefully offering namaz there since a very long time, without any problems. Mosques are built to offer prayers, and it is our fundamental right given to us by the constitution."

The ASI officials say security agencies have been told to deal firmly with the violators of the order.