This is the first report of rhino poaching from Kaziranga, which is already on high alert over reports of African swine fever, in over a year 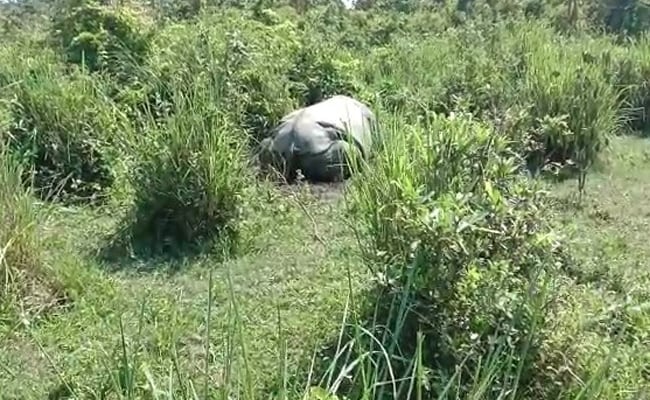 Amid a nationwide lockdown over the COVID-19 outbreak, tragedy struck Assam's Kaziranga National Park on Saturday - an adult male Indian rhinoceros (also called greater one-horned rhino) was gunned down and its horn was hacked off.

Park authorities found eight empty cartridges from an AK-47 assault rifle at the scene, suggesting the poachers were well-armed.

This is the first report of rhino poaching from Kaziranga, which is already on high alert over reports of African swine fever (an infectious viral disease that affects domestic and wild pigs) in over a year.

The carcass was found in the park's Agartoli Range, which is located in the eastern side of Kaziranga and is famous for both rhinoceros and elephants.

Last year the Assam government raised, trained and deployed a special Rhino Protection Force, consisting of 82 armed personnel tasked with protecting rhinos from poachers. Since then, there had been no reports of rhinos being poached; the last such incident was reported on April 1, 2019.

According to the World Wildlife Fund (WWF), there are approximately 3,500 rhinos in northeast India, with around 2,400 of them in Kaziranga.

Across the world there are around 27,300 rhinos (divided into five species), according to a 2019 report by the International Rhino Foundation. As per the report, in Africa poachers killed around 900 rhinos in 2018.

The report also notes government protection for the Indian rhino has ensured an increase in numbers.

The largest member of the rhino species, an adult male greater one-horned rhinoceros can grow up to 12 feet in length and weigh over 2,500 kg.

Rhinos are hunted primarily for their horns, which are made from keratin (a protein that is also found in human hair and nails) and used to prepare traditional medicines in certain Asian countries.

Illegal wildlife trade is worth between seven and 23 billion dollars, according to a 2016 United Nations report. The share of rhino horns in this is unclear, but according to British publication The Telegraph, in February last year, Vietnamese officials stopped 55 rhino horns being smuggled into the country.

The shipment, which came from the UAE, was valued at over $7.5 million.