Congress leaders explained that while they never objected to Pranab Mukherjee hosting RSS chief Mohan Bhagwat at the Rashtrapati Bhavan for lunch, going for an official visit to Nagpur was more than they could accept. 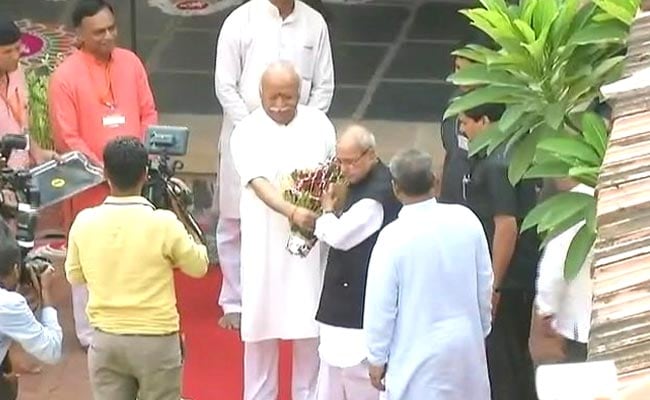 New Delhi: Pranab Mukherjee has tossed a political grenade of epic dimensions with his  visit to the RSS headquarters in Nagpur - his party of over five decades, the Congress, has publicly condemned his trip which sees him as chief guest at a key RSS function for thousands of the organization's volunteers - and the RSS has publicly retorted that "Pranab Mukherjee is a mature and experienced politician."

Criticism from the Congress was served upon Mr Mukherjee at the instruction of Sonia Gandhi, his former boss, said party sources.  It was she who reportedly asked her political aide and Congress power player Ahmed Patel to tweet last night, "I did not expect this from you Pranab da."

The hard feelings are also personal. Pranab Mukherjee's daughter Sharmishtha Mukherjee, a Congress leader, also tweeted last night that his visit gives the BJP all sorts of undue advantage and that that while the speech he delivers may not make a lasting impression, the image will never fade.

Hope @CitiznMukherjee now realises from todays' incident, how BJP dirty tricks dept operates. Even RSS wouldn't believe that u r going 2 endorse its views in ur speech. But the speech will be forgotten, visuals will remain & those will be circulated with fake statements. 1/2

Mr Mukherjee was President from 2012 to 2017. He landed in Nagpur last night and reportedly dined with RSS chief Mohan Bhagwat. Today, he addressed a public meeting of RSS volunteers.

In the days following Mr Mukherjee's RSVP to the organization he has criticized in the past, there was a concerted effort to stop him from going to the RSS event, not just by his daughter and son Abhijeet but also from the party. NDTV has learnt that senior leader Anand Sharma was among those who met with him to try and talk him out of the RSS event. They reported to the party that he had promised to reconsider.

Jairam Ramesh urged him not to go to the event, while P Chidambaram avoided any outright criticism and said: "Sir you have accepted invitation, please go there and tell them what is wrong with their ideology."

Congress leaders explained that while they never objected to Pranab Mukherjee hosting RSS chief Mohan Bhagwat at the Rashtrapati Bhavan for lunch, going for an official visit to Nagpur was more than they could accept; "no President or Prime Minister had ever done that before," said a leader.

The former president made it clear a few days ago that he would stick to his plans. There have been reports that Citizen Mukherjee, as he calls himself on Twitter, is working on establishing himself as the potential pivot of a non-BJP, non-Congress front  - what's being referred to as a "federal front" of regional parties.

The RSS or Rashtriya Swayamsevak Sangh is the ideological mentor of the ruling BJP and the fountainhead of a group of pro-Hindu organisations often described as the "Sangh Parivar".

Promoted
Listen to the latest songs, only on JioSaavn.com
As Finance Minister in the previous Congress-led central government, Mr Mukherjee had called for an investigation into the links between the RSS and terrorists. "The role of religious fundamentalist organisations in challenging the security of the nation can't be ignored. Investigate links between terrorists, RSS and its sister organisations uncovered in some recent cases," said a political resolution in a Congress meet in 2010.

Mr Mukherjee's "going rogue" on the Congress comes at a time when the party is leading the effort to unite opposition parties in blocking Prime Minister Narendra Modi's attempt at re-election. These parties say that their differences are being abandoned in the interest of secularism. Mr Mukherjee's mixing with the RSS is seen as weakening the allegation that the organization and its agenda seek to divide India by propagating a Hindu-first ideology.