According to the team, the newly-isolated bacteria from the scat of vine snake are resistant to at least 35 types of antibiotics. 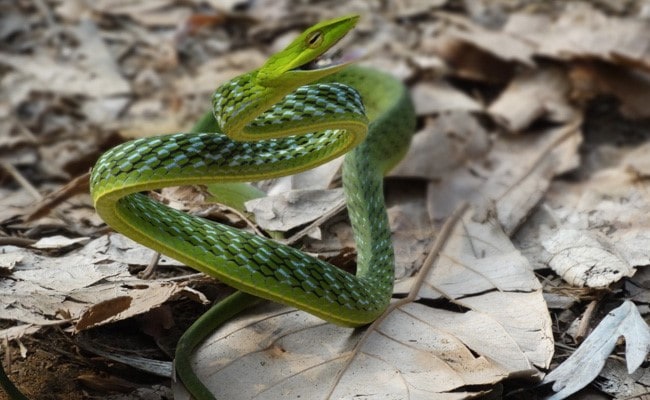 A group of researchers from Pune and Chandigarh has discovered two new "multi drug-resistant" bacteria from the scat of "vine snake", a mildly venomous reptile, commonly found in Northern Western Ghats.

According to the team, the newly-isolated bacteria from the scat of vine snake are resistant to at least 35 types of antibiotics and as it could spread infectious diseases in future, it is better to conduct research in that direction to make some antibiotic medicines.

Dr Ravindra Chaudhari, one of the researchers, said the micro-organisms present in scats of animals very easily come in contact with human beings and other animals through water flow during rainy season and also through air.

"The bacteria reported here comes under family Planococcaceae and some species of this family are pathogenic (causing or capable of causing disease) in nature, so it is important to identify the bacteria in snakes because they can cause infectious diseases. There is a possibility that there could be an infectious disease caused due to these newly-discovered bacteria," he said.

He said that generally, antibiotics are used to treat any infection, but the bacteria found in the snake are resistant to 35 types of antibiotics.

"Recently, it has been observed that the Chinese krait and the Chinese cobra may be the original source of coronavirus that has triggered an outbreak of a deadly infectious respiratory illness. When the researchers performed a more detailed bioinformatics analysis of the sequence of 2019-nCoV, it suggests that this coronavirus might have come from snakes," he claimed.

He added that the World Health Organization (WHO) recently claimed that 70 per cent of infectious diseases will cause due to micro-organisms from wildlife.

"So it is better we start a research into that direction and make some anti-biotic medicines, which will be helpful for humans," he added.

Dr Yogesh Shouche, another researcher from the NCCS, said that many bacteria, including those which are multi drug-resistant in snakes, lead to wound infection after the snake bites.

"In some serious cases, patients may suffer from cellulitis, tissues necrosis, finger or toe gangrene, and/or extensive necrotizing fasciitis. To avoid such type of infections, antibiotic therapy is the only way. However, these newly-isolated bacteria are resistant to antibiotic drugs, which is a cause of serious concern," he said.

"We are focusing on the study of the pathogenicity of these bacteria in relation to humans as well as other animals," said Shouche.

He added that the human microbiome's (a community of microorganisms such as bacteria, fungi and viruses) contributions range from helping to provide nutrition and aiding growth, development, and behavior to protect against pathogens and toxic compounds.

Dr Shrikant Pawar, a member of the team, said that the gut microbiome plays a major role in maintenance of human health. The gut microbiome is involved in the progress and development of human diseases. These include metabolic and inflammatory disorders, cancer, depression, as well as infant health, and longevity.