The release of Rajiv Gandhi's killers is one of the key common grounds between the DMK and its political rival AIADMK in view of the sensitivities on the subject in the southern state. 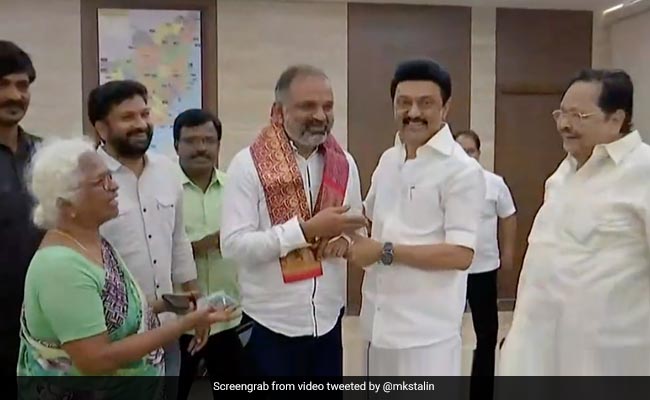 AG Perarivalan, convicted for Rajiv Gandhi's assassination, was in jail for 31 years.

AG Perarivalan -- one of the seven convicts in former Prime Minister Rajiv Gandhi's assassination case whose release was ordered by the Supreme Court today -- and his mother Arputhammal met Tamil Nadu Chief Minister MK Stalin in Chennai this evening.

Mr Stalin tweeted a video of the meeting. A rough translation of the caption in Tamil reads, "I met brother Perarivalan, who has returned after over 30 years in prison. I asked Brother Perarivalan and Arputhammal to set up a home life for themselves and live happily".

The release of Rajiv Gandhi's killers is one of the key common grounds between the DMK and its political rival AIADMK in view of the sensitivities on the subject in the southern state.

The cause of the Lankan Tamils has always generated sympathy given the state's long tradition of identity-based Dravidian politics.

In its last manifesto ahead of the state elections, the DMK had promised to set free the seven convicts in the assassination case once it comes to power.

Perarivalan has been behind bars for 31 years. Though the cabinet of former Chief Minister E Palaniswami had recommended the release of all seven convicts in 2018, consecutive Governors had not taken action.

Present Governor RN Ravi had told the court that the matter has been referred to President Ram Nath Kovind, who was yet to take a call on it.

The top court had questioned the Governor's action, observing that a Governor is bound by the cabinet decision to release all seven convicts in the case, granting them pardon under Section 161 of the Constitution.

Today, the Supreme Court decided to release him invoking its special powers.

"The state cabinet had taken its decision based on relevant considerations. In exercise of Article 142, it is appropriate to release the convict," said the judges led by Justice L Nageswara Rao.

Critics have questioned what message the release of convicts in an assassination case of a former Prime Minister sends to the world. The release might lead to the release of the other six convicts in the case -- including Nalini Sriharan and her husband Murugan, a Sri Lankan.

The Congress has expressed its "sorrow and fury".

Calling it a "sad day for the country", party spokesperson Randeep Surjewala said, "Today, we are deeply pained and disappointed at the decision of the Supreme Court… There is a sorrow and fury not only in every Congress worker, but in every Indian who believes in India and Indianness, who believes in fighting against extremism and every force that challenges the sovereignty and integrity of India".

The top court has also taken into account Perarivalan's exemplary conduct in jail including his acquisition of degrees.