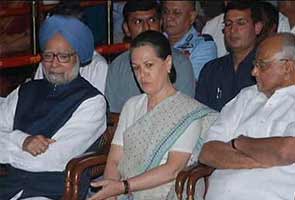 New Delhi: After using a televised speech to explain his recent economic reforms to the nation, the Prime Minister defended  them today in person to important allies of his government. It was a tough room; they reportedly remained unconvinced.

At a meeting  of senior UPA leaders, the first since Mamata Banerjee pulled out of the coalition, leaders of parties like the DMK and NCP  asked for a partial reversal of the diesel price hike and  the introduction of a six-cylinder limit of subsidised cooking gas for every household. The Prime Minister, sources say, held his ground, supported by Finance Minister  Chidambaram. After the meeting, Mr Chidambaram said  that the Prime Minister explained the need for " measures that will ensure  there is no volatility of the rupee and to ensure investments continue to flow into India."

But the discontent among the Congress' partners underlines the fragility of a government that is in a minority after Ms Banerjee and her Trinamool Congress exited, describing the new reforms as "anti-people."

At today's session of the coordination committee  of the UPA,  it was the  DMK, which was most open in its criticism. With its 18 Lok SAbha MPs the DMK is now the second-largest member of the coalition after the Congress.  Its TR Baalu said, according to sources,  that while economic reforms may be crucial, parties cannot ignore the fact that there are elections in the near future, and moves to limit the supply of cheap cooking gas to families will not go down well with voters. Mr Baalu demanded that the limit on discounted gas cylinders be raised from six to 12 per year for every household.  It has already said it does not agree with the PM's decision to open the retail sector to foreign super-stores like Wal-Mart. The NCP, headed by Sharad Pawar, also asked for a reconsideration of the cap on cylinders.

Promoted
Listen to the latest songs, only on JioSaavn.com
At today's meeting, the UPA also discussed a strategy to counter the opposition to Foreign Direct Investment or FDI in retail. The BJP, which is holding its own meeting of senior leaders on the outskirts of the capital, has decided to target the UPA for approving what it will position as "anti-people" policies. (Read: Gadkari on FDI) Thousands of traders and union leaders have opposed the liberalization of the retail sector, though the UPA has stressed that individual states have the right to ignore the policy if they disagree.

Another challenge for the UPA is fighting a new set of charges of graft - the national auditor has said Rs 1.86 lakh crore were lost because the government allowed coal blocks to be allocated without an auction. The government has rejected this finding, but the Supreme Court has asked for a detailed explanation of the guidelines it followed when sanctioning coal permits.