Read inOther Languages
This Article is From Jun 22, 2020

Rath Yatra Puri: "It is a matter of faith for crores. If Lord Jagannath will not come out tomorrow, he cannot come out for 12 years as per traditions," Solicitor General Tushar Mehta, who represented the centre, told the Supreme Court. 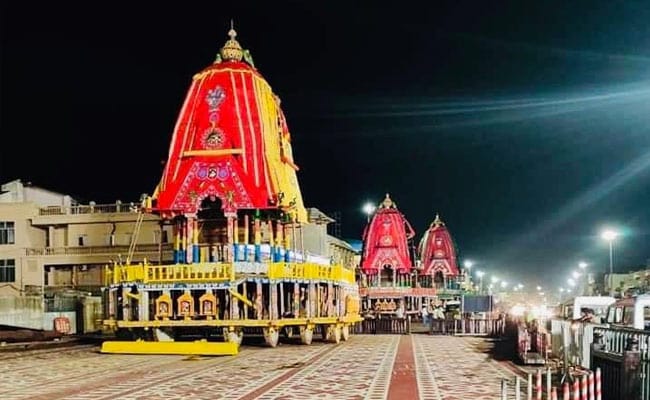 The Rath Yatra in Odisha's Puri is attended by lakhs of people from across the world.

The Supreme Court has agreed to hear petitions seeking to recall its order putting on hold the Rath Yatra in Odisha's Puri this year due to the coronavirus pandemic. The centre and the Odisha government told the top court today that they support the holding of the Rath Yatra - which is scheduled to start tomorrow - with certain restrictions.

"It is a matter of faith for crores. If Lord Jagannath will not come out tomorrow, he cannot come out for 12 years as per traditions," Solicitor General Tushar Mehta, who represented the centre, told the Supreme Court. The centre said the state government can impose curfew for a day to ensure that the virus is not spread, while maintaining precautions.

"A ritual going on for centuries cannot be interfered with. Only people tested negative (for coronavirus) and working in the Lord Jagannath temple can be part of the ritual," Mr Mehta, who mentioned the matter before a bench headed by Justice Arun Mishra, said.

The Supreme Court said Chief Justice of India SA Bobde has set up a three-judge bench to hear the petitions later today. Chief Justice Bobde, who is in Nagpur because of the top court's summer vacation, will hear the case along with Justices AS Bopanna and Dinesh Maheshwari through video-conferencing.

The centre also told the top court that the people can seek blessings on television during the live telecast. "Raja of Puri and the temple committee may supervise arrangements of these rituals," the centre said.

"Lord Jagannath will not forgive us if we allowed the Rath Yatra," Chief Justice of India SA Bobde had said last Thursday while hearing a petition seeking to defer the Rath Yatra in Puri.

"Such gatherings can't take place at the time of the pandemic," the Supreme Court had said, referring to the advice by health professionals to maintain social distancing as the highly infectious coronavirus can spread via respiratory droplets and surface contact. The risk increases manifold in a crowded environment.

A 19-year-old Muslim student from Odisha's Nayagarh district is among the 24 petitioners who have approached the Supreme Court seeking a recall of its order staying the Rath Yatra this year.

The Rath Yatra in the coastal district of Puri is attended by lakhs of people from across the world.

A non-profit, Odisha Vikas Parishad, in its petition had said the annual festival in Puri will draw some 10 lakh people and the religious event goes on for 10 to 12 days. The Rath Yatra amid the COVID-19 pandemic "will be an invitation to infect lakhs of devotees", the petition said, adding the Odisha government has also not allowed religious places to open before June 30.