Pharmacists are warning of a shortage of a crucial drug to treat an invasive fungal infection preying on patients with weakened immune systems. 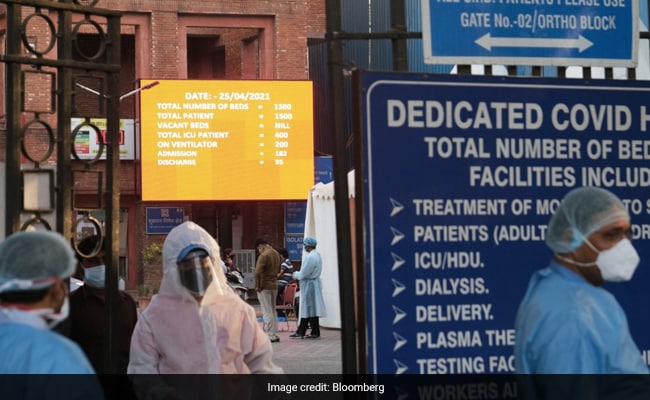 India has reported more than 25 million Covid cases, with half occurring in the past two months alone.

Rare, life-threatening Covid-19 complications appear to be escalating in India, creating a fresh wave of critical medical challenges in a country that has already seen short supplies of oxygen and other basic needs.

Pharmacists are warning of a shortage of a crucial drug to treat an invasive fungal infection preying on patients with weakened immune systems. An uptick in cases across India of a dangerous inflammatory syndrome in children -- also seen in the U.S. and Europe at the height of their outbreaks -- is a harbinger of a potentially deadly spate of the pediatric illness in the coming weeks.

Once considered a rare "opportunistic" fungal infection in Covid-19 patients, mucormycosis has emerged as a dramatic bellwether for a raft of secondary ailments symptomatic of India's inability to contain the world's fastest-growing coronavirus outbreak. There are as many as 1,500 patients with this condition, known locally as "black fungus," in Maharashtra alone, with the state government expecting 200 new cases every week. Rajasthan has declared it an epidemic in the state.

"Mucormycosis is part of a cascade of secondary medical problems erupting in India that have been rare or non-existent in other places," said Catherine Bennett, chair in epidemiology at Deakin University in Melbourne. "The magnitude of the epidemic and the inability to provide adequate care for Covid patients means India is seeing a lot of cases, adding another, significant dimension to the Covid burden." 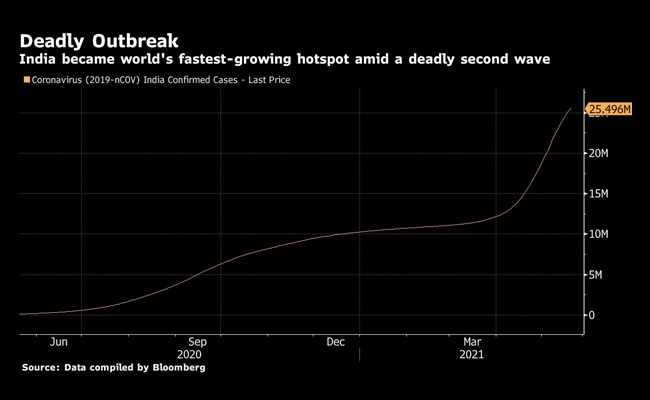 That's likely to be a vast underestimate, with many cases likely being missed given India's extensive rural hinterland amid overwhelming demand on clinics and hospitals.

"The second wave has taken us into uncharted territories," said Randeep Guleria, director of New Delhi's All India Institute of Medical Sciences, one of the country's top hospitals, in an interview. "We knew there would be a second wave given the international experience, but didn't expect such ferocity. It was like wildfire."

Patients treated for the coronavirus infection are often given a plethora of unnecessary medications in India, including antibiotics, antivirals and steroids, researchers said. This can trigger or exacerbate other complications in some cases.

"Pressure on doctors and panic among patients is making it worse," Mr Guleria said. "There's sometimes a knee-jerk reaction among physicians, who choose aggressive medical treatments instead of being conservative."

The overuse of medicines -- high in India during pre-pandemic times -- has skyrocketed during the pandemic, said Ramanan Laxminarayan, director of the Center for Disease Dynamics, Economics & Policy in New Delhi. "The damaging effect of this irrational use of medicines is potentially as high as that of the virus itself."

Steroids depress the body's immune system, making patients more susceptible to secondary infections, such as mucormycosis, which may be triggered by mold-tainted oxygen pipes and humidifiers.

The infection can start in the skin and invade the sinuses and other parts of the face. It requires surgery if it's not subdued with anti-fungal therapy. Without treatment, it can cause a lethal bloodstream infection.

Ms Menghaney said she knows of at least one patient from Karnataka who died this week because he was unable to get the optimal medication for mucormycosis, liposomal amphotericin B, which is hard to procure even when demand is low. It typically costs about $70 per vial, and patients may need as many as 20 vials, she said.

"I'm getting reports of shortages across the country," Ms Menghaney said. "People are willing to pay anything to get the drug. The patients coming from poor, rural areas are just not able to access the drug because it's so expensive."

Inadequate infection control in hospitals also risks exposing Covid patients to secondary bacterial and fungal infections, many of which can't be treated with basic medications, Mr Laxminarayan said. "The evidence is only anecdotal at this time, since India doesn't have a systematic method" to track such infections, he said.

Even more ominous are the complications in children that parents and doctors are describing.

Khushnooma Kapadia, a Mumbai hospitality worker, said her 11-year-old son suddenly developed bloodshot eyes, swelling around his neck, severe diarrhea, vomiting, and a rash that covered his body. Tests indicated he was infected with SARS-CoV-2 four weeks earlier, even though he had no symptoms at the time. Nearly a month later, the boy is still recovering, with persistent weakness, Ms Kapadia said.

Doctors diagnosed it as multisystem inflammatory syndrome, or MIS-C, a life-threatening pediatric condition causing inflamed and swollen blood vessels. It's estimated to occur in about 1 in 5,000 children four-to-six weeks after exposure to the coronavirus.

Covid-19 cases in India appear to have peaked last week. That means the surge in MIS-C cases may worsen in coming weeks, T.G. Sundaram and Latika Gupta, researchers at the Sanjay Gandhi Postgraduate Institute of Medical Sciences in the north Indian city of Lucknow, said in a recent paper.

Intravenous immunoglobulin is the recommended treatment, but that's in limited supply even in wealthy countries, said Nigel Curtis, a professor of pediatric infectious diseases at the University of Melbourne. "This is very likely to be an additional challenge in India," he said.

While there's no aggregate data for pediatric Covid or MIS-C cases in India, five doctors said they are seeing younger patients during the current epidemic. Some speculate the increase might be due to the new so-called "variant of concern" known to be increasing transmission.

Anuradha Mittal, a pediatrician at Kailash Hospital, on the outskirts of New Delhi, said she's seeing four-to-five times more pediatric Covid cases this year compared to the first wave last year. "The volume of infections and virulence of the pathogen -- both are higher this time," she said, adding that even some newborns delivered by Covid-19 patients have tested positive.

Although India has a deep history of medical research and a wide pool of experienced health-care providers, scientists and clinicians are frustrated with a lack of centralized systems to share data and evidence about optimal treatments.

That's frustrating efforts to both learn what factors are driving Covid-19 complications in India, as well as the ability to counter misinformation, said Manoj Mohanan, a health economist and an associate professor at Duke University in North Carolina.

The secondary medical problems can be avoided with better patient care, which makes it critical the rest of the world gives India the support it needs "to stop this chain of preventable disease," Deakin University's Bennett said.

"We've chronically under-invested in health care," Mumbai pulmonologist Zarir Udwadia said in a podcast with editors of the New England Journal of Medicine this month. "We spend less than 1.4% of our GDP on public health care, and all that is coming back to haunt us."