Higher Education Minister Mohan Yadav said the changes were meant to "bring our glorious past to the fore". The syllabus is being implemented "on recommendation of scholars", he added. 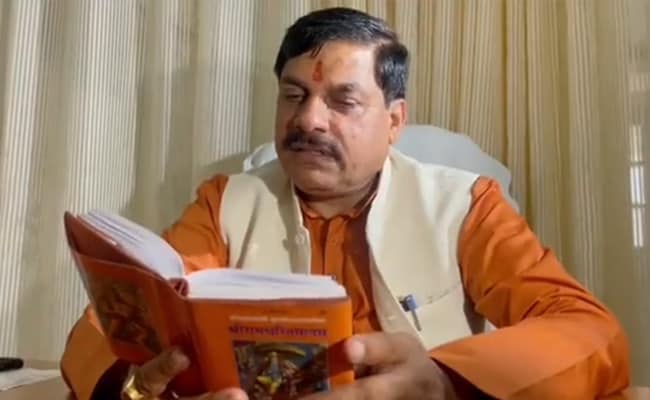 "Ramcharitmanas" of Tulsidas will be part of the curriculum for undergraduate students in Madhya Pradesh and students of engineering will have to learn about Ramsetu -- which many in the right wing considers a feat of engineering. For medical stream, students will be offered the option of studying medicine in Hindi.

"We are going to form a committee at the earliest to ensure that medical education courses are prepared in Hindi as well. In the near future, we will start medical studies in Hindi too," said the state's Medical Education Minister Vishwas Sarang.

On the recommendation of the syllabus committee for higher education, "Ramcharit Manas Ke Vyavharik Darshan" (Applied philosophy of Ramcharitmanas) has been introduced as an elective course for first-year BA students from the academic session of 2021-22.

This will have a 100-mark question paper and include topics such as "Spirituality and religion in root sources of Indian culture", "Four ages in Vedas, Upanishads and Purans", "Difference between Ramayana and Shri Ramcharitmans" and "Incarnation of divine existence".

In the foundation course for English, a preface to Mahabharata by C Rajagopalchari will be taught to first-year students -- the objective, according to the order, is to help students develop "leadership ability and humanistic attitude by focusing on various dimensions of personality development".

There is also a proposal to include the biographies of Rashtriya Swayamsevak Sangh founder Dr KB Hedgewar, Bharatiya Jan Sangh chief Deen Dayal Upadhyaya and Dr BR Ambedkar among other leaders as part of the first-year foundation course in medicine to instill social and medical ethics in students.

Higher Education Minister Mohan Yadav said the changes were meant to "bring our glorious past to the fore". The syllabus is being implemented "on recommendation of scholars", he added, countering Congress allegations of "saffronisation of education".

"It has been proved by a NASA study that Ram Setu was a man-made bridge built millions of years ago," he said.

Congress leader Arif Masood told reporters that it would have been better if the BJP government had added Guru Granth Sahib, Quran and Bible along with Ramcharitmanas. "Children will get more information and the spirit of the country's constitution will also be fulfilled," he said.

Madhya Pradesh made an effort towards having a Hindi curriculum for higher studies earlier. In 2011, the Atal Bihari Vajpayee Hindi University was established in the state for engineering and medical education in Hindi.

But even after 10 years, it has made no headway. The engineering stream was discontinued in 2018 in absence of adequate faculty, translated syllabus, books and students. Medical studies in Hindi have not been started till date.

By way of students, the university has eight peons and two drivers; 74 departments are being handled by 29 teachers -- all guest faculty. No recruitment has taken place in the last 10 years.