Ram Temple Trust To Have Office In Delhi's Greater Kailash

The Supreme Court had also ordered that five-acre land will be given to the Sunni Central Waqf Board in Ayodha at an alternative site. 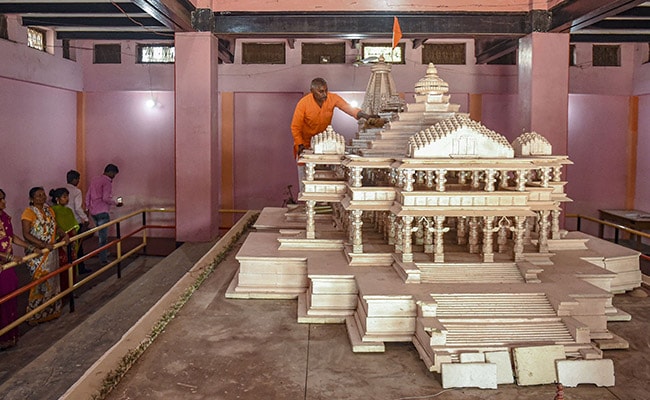 Shri Ram Janmbhoomi Teerth Kshetra will have 15 members, including a Dalit

The Shri Ram Janmbhoomi Teerth Kshetra, the newly-created trust for the construction of a Ram temple in Ayodhya, will have its office in Delhi's Greater Kailash locality, the Home Ministry said on Wednesday.

In a notification, the ministry also said as directed by the Supreme Court, the Uttar Pradesh government has already issued the allotment letter of a five-acre plot to the Sunni Central Waqf Board for construction of a mosque.

While delivering its judgment in the Ram Janmabhoomi Babri Masjid title dispute case on November 9 last year, the top court had said the trust should be formed within three months for the construction of the temple at the site where many Hindus believe Lord Ram was born.

The Supreme Court had also ordered that five-acre land will be given to the Sunni Central Waqf Board in Ayodha at an alternative site.

The notification said a trust by the name "Shri Ram Janmbhoomi Teerth Kshetra" has been registered with its registered office at R-20, Greater Kailash Part-1, New Delhi, 110048.

Earlier, Prime Minister Narendra Modi had announced in the Lok Sabha that the Union Cabinet has given its approval for the constitution of the trust for the construction of the Ram temple.

The trust will have 15 members, including a member from the Dalit community, Union Home Minister Amit Shah said.

The ministry said the Acquisition of Certain Area at Ayodhya Act, 1993, came into force on January 7, 1993, and the divisional commissioner of Uttar Pradesh's Ayodhya Division was appointed as the authorised person for securing possession of the area and its management.

In compliance with the Supreme Court's November 9, 2019, directions, the government of India has approved a scheme that has made necessary provisions with regard to the trust's functioning, the notification said.

The provisions include matters relating to management of the trust, powers of the trustees, including construction of the temple, and all necessary, incidental and supplemental matters, it said, adding that the scheme was approved vide order number "71011/02/2019-AY" dated February 5.

The ministry said in compliance with the top court's directions, possession of the disputed site's inner and outer courtyards shall be handed over to the trust.

The Centre has the liberty to make suitable provisions in respect to the rest of the acquired land by handing it over to the trust for management and development in terms of the scheme framed by the central government, as per the Supreme Court's directions, it said.

The Centre, after consultation with the Uttar Pradesh government, has decided to effectuate the allotment of a suitable land measuring five acres to the Sunni Central Waqf Board at a prominent place in Ayodhya, outside the land acquired under the Act, the ministry said.

This has been done taking into account past communal disturbances, possible scenarios relating to law and order and concerns relating to communal harmony and security, it said.

Therefore in exercise of powers conferred by sub-section (1) of section 6 of the Acquisition of Certain Area at Ayodhya Act, 1993 and in compliance with the Supreme Court judgment, the Centre directs that all rights, title and interests in relation to the entire area acquired under the Act, including the inner and outer courtyards of the disputed site shall vest in trust, the home ministry said.