Ram Temple Should Be Constructed Where It Was Decided To Be: RSS

On the issue of appointment of a mediation panel by the apex court, Bhaiyyaji Joshi said the RSS welcomes any initiative that can help resolve this issue to construct the Ram Temple. 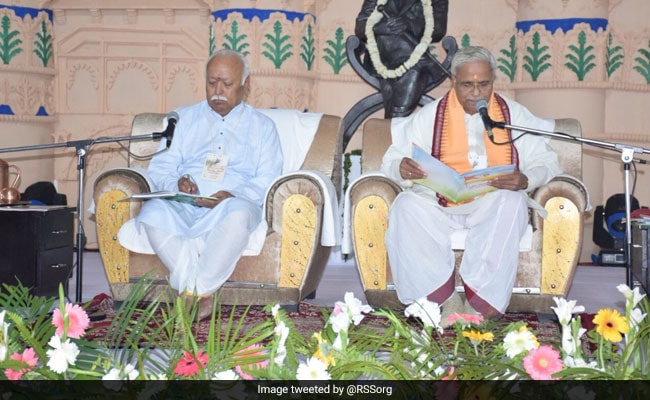 Expect government to remove the barriers in the path of constructing the temple at the earliest: RSS

The RSS on Sunday welcomed appointment of a mediation panel by the Supreme Court but asserted that the Ram temple should be constructed at the place where it has been decided to be built.

"RSS' stand on Ram Temple is clear. It should be built at the place where it has been decided to be built," RSS Sarkaryavah Bhaiyyaji Joshi told media on the concluding day of the three-day Akhil Bharatiya Pratinidhi Sabha (ABPS).

He added the movement on this issue will continue till the temple is constructed.

On the issue of appointment of a mediation panel by the apex court, he said the RSS welcomes any initiative that can help resolve this issue to construct the Ram Temple.

"The RSS expects that the government and the Court would remove the barriers in the path of constructing the temple at the earliest. It is also expected from the mediation panel that they would understand the Hindu sentiment," he said.

Mr Joshi said those in power are not opposed to the Ram Temple and there is no doubt over their commitment regarding this.

Appreciating the government's response in terms of carrying out air strikes at terror camps in Pakistan in wake of Pulwama terror attack, he said that the fearless nations reply to the terrorists in similar language.

To a question on Article 370, he said the case related to Section 35A is in Court and it is expected that the government of the day will keep the viewpoint firmly.

"After a decision on this case is delivered, the issue of Article 370 will be discussed in light of this decision," he said.

"Our society has started thinking more clearly over the period time and the common people know who works for the betterment of the nation," he said.

He said that the three day meet of ABPS reviewed various activities of the organisation and discussed contemporary issues.

"The RSS has decided to take up a new initiative in the field on environment protection and conservation," he said adding that the RSS' work has reached at a certain level and now it was time to take a big leap in terms of expansion of the work.