Rajnath Singh is on a two-day visit to West Bengal and Sikkim to review the preparedness of the forces amid the standoff with China. 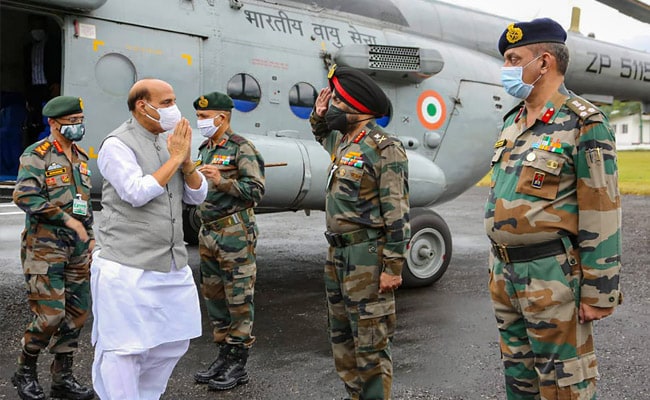 Rajnath Singh landed at the Sukna military base in Darjeeling district on Saturday.

Defence Minister Rajnath Singh will perform the "Shastra Puja" - the customary worship of weapons for the festival of Navratri - at Sikkim's Sherathang, less than 2 km from the Line of Actual Control - on Sunday and spend Dussehra with soldiers a day later, in a hugely symbolic gesture amid the standoff with China in eastern Ladakh.

On Saturday, Mr Singh reviewed the combat preparedness of the Indian Army at the Sukna-based headquarters of its 33 Corps which guards the Line of Actual Control or LAC with China in the Sikkim sector, officials said.

On a two-day visit to West Bengal and Sikkim to review the preparedness of the forces, the defence minister arrived at the key military base, popularly known as ''Trishakti'' Corps, in Darjeeling district in late afternoon along army chief General Manoj Mukund Naravane.

The army has significantly strengthened its troops and weaponry along the nearly 3,500 km-long de-facto border including in the Sikkim and Arunachal Pradesh sectors given the tension in Ladakh that has shown no sign of easing.

The defence minister and the army chief were briefed in detail by top commanders of the 33 Corps on the situation along the de-facto border in Sikkim sector.

In an interaction with army personnel, the defence minister conveyed his wishes to them on the occasion of Vijayadashami and praised their dedication in securing the borders.

"The borders of this country are protected because of brave soldiers like you. The whole country is proud of you," he said.

Last year, the defence minister had performed the Shastra Puja in the French port city of Bordeaux during a visit to the country to formally receive the Rafale fighter jets.

Mr Singh has been performing the Shastra Puja during Dussehra for the last several years including during his tenure as the Union Home Minister in the previous National Democratic Alliance (NDA) government.